High-level visit by H.E. Ct Herman VAN ROMPUY at the College of Europe in Natolin

On Wednesday 5 February 2020, on the occasion of the Belgian National Day at the College of Europe in Natolin organized by the Belgian students of the Hannah Arendt Promotion, we had the honour to host H.E. Ct Herman VAN ROMPUY, former Prime Minister of Belgium (2008-2009), former President of the European Council (2009-2014), and current President of the Administrative Council of the College of Europe.

H.E. Ct Herman VAN ROMPUY delivered a high-level talk on "Belgium in the World and in the EU". The conversation was moderated by H.E. Ambassador Luc JACOBS, Ambassador of Belgium to Poland and Lithuania. The event was closed by a thought-provoking Q&A session with Natolin students, during which Ct VAN ROMPUY shared interesting insights drawing from his outstanding political and institutional experience.

Later in the evening, Ct Herman VAN ROMPUY, Ambassador Luc JACOBS, together with the Vice-Rector of the College of Europe Mrs Ewa OŚNIECKA-TAMECKA participated in the traditional dinner with students as part of the Belgian National Day.

During his visit to the College of Europe in Natolin, Ct VAN ROMPUY also taught a seminar on "The Role of European Council" in the framework of our MA in European Interdisciplinary Studies. 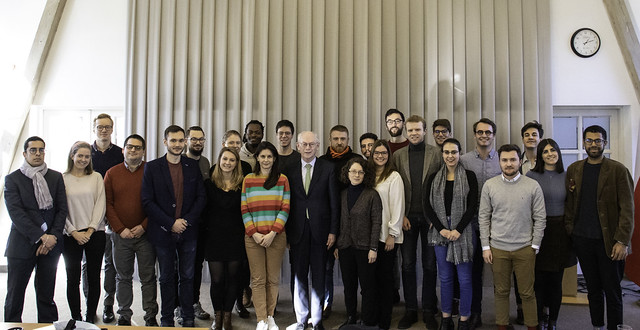