From 29 March to 4 April 2020, Natolin students took part in the online programmes of the second semester study trips, focusing on the following main themes:

Despite the current travel restrictions, the academic programmes of the study trips were maintained and transformed into almost 80 hours of digital content, comprising 8 online preparatory lectures and about 50 online special lectures, panels, and other digital encounters featuring around 80 speakers connected from several countries, such as France, Belgium and Luxembourg; Lithuania, Latvia, Estonia and Finland; Jordan; as well as Serbia, Montenegro and Bosnia & Herzegovina.

It is our conviction that the online academic programmes of the study trips adhere to the long tradition of Natolin’s teaching excellence and we are grateful to our esteemed speakers for agreeing to participate in this new format of our meetings. 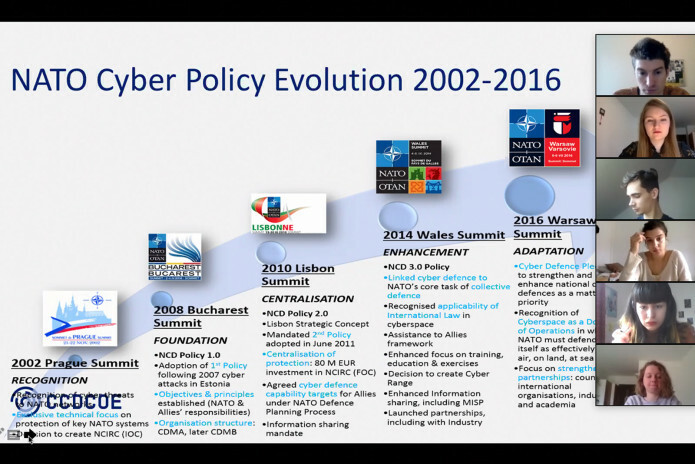 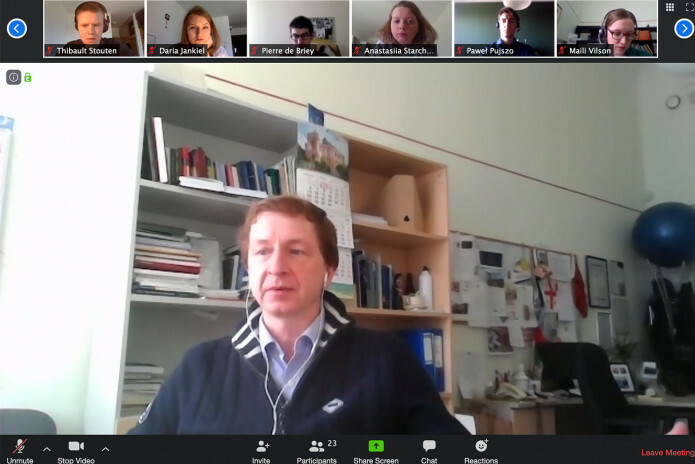 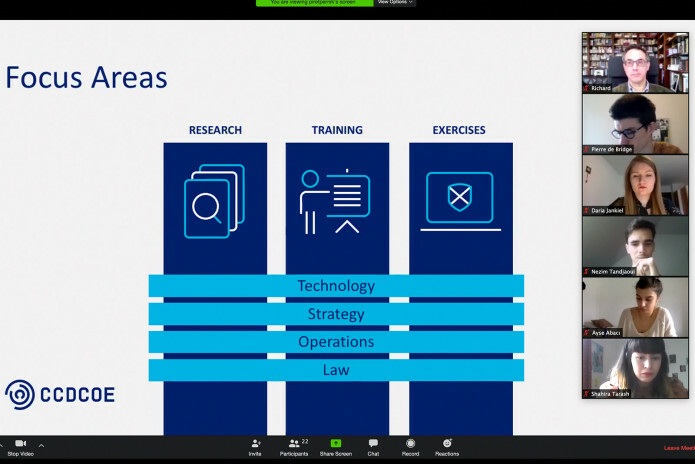 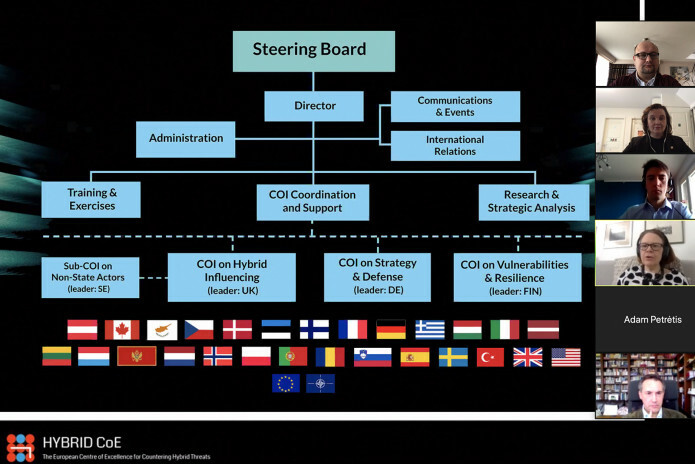 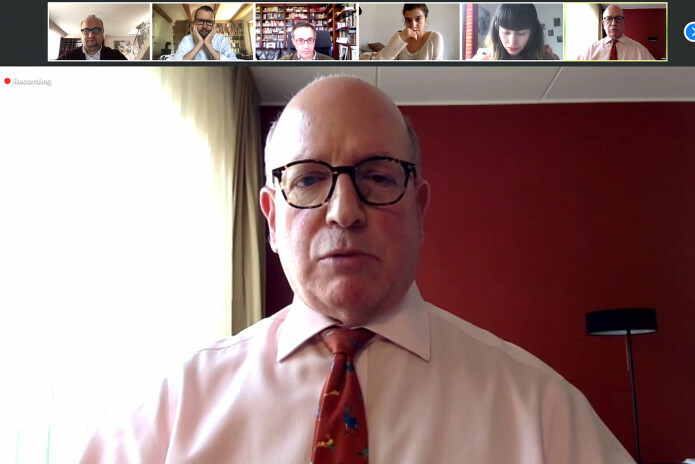 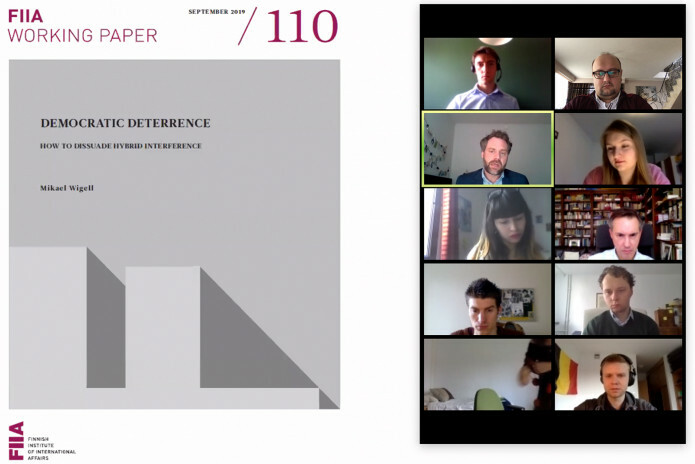 Transforming Societies: Managing digital and climate transitions in Europe and beyond 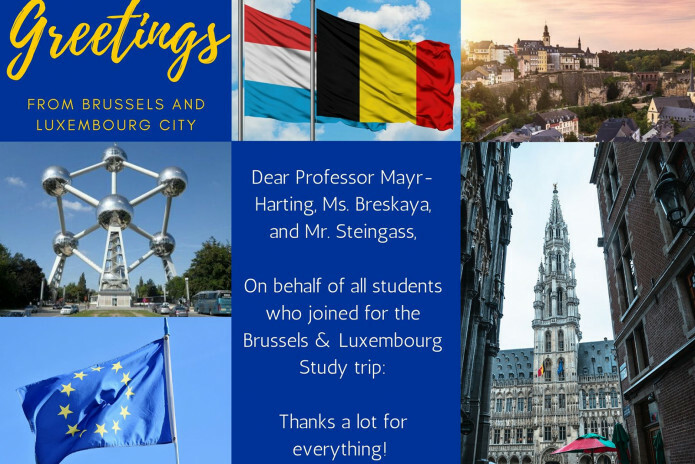 Under this theme, Natolin students had a chance to virtually meet with representatives of key EU institutions, think-tanks and press to learn more about the EU’s strategy for the sustainability transition and digital transformation, as well as to discuss the situation with a focus on the role of the US, China and Russia.

The academic programme began virtually in Brussels, where students met with representatives of the European Commission: Ms Maja KOCIJANČIČ, Member of the Varhelyi Cabinet, Ms Alina UJUPAN, Member of the Vestager Cabinet and Ms Aleksandra TOMCZAK, Member of the Timmermans Cabinet, to discuss the priorities of the new Commission. The programme also included virtual visits to the European External Action Service (EEAS) and the German Marshall Fund to learn more about the global cooperation between the EU, US, China and Russia. Students also participated in digital meetings with the NATO Public Diplomacy Division as well as with Ms Anna GUMBAU, journalist at Carbon Pulse and Natolin alumna, to discuss the process of communicating climate and digital transitions in the EU.

Connected with Strasbourg, students met with members of the European Parliament: Dr Othmar KARAS (EPP), Vice President of the European Parliament, and Mr Reinhard BÜTIKOFER, MEP of the Greens. As a part of the academic programme in Luxembourg, students were invited to the Court of Justice of the EU for digital meetings with the First Advocate General, Prof. Maciej SZPUNAR, and two Judges of the General Court, Prof. Nina PÓŁTORAK and Prof. Krystyna KOWALIK-BAŃCZYK, to discuss EU Law and Technology. A virtual visit was also made to Eurostat, to talk about the role of Big Data, and to the European Investment Bank, to learn more about its role in climate transition.

On the final day of the study trip, students virtually visited the Château de Belœil where they had the honor to discuss with His Highness Michel, Prince de Ligne, the history of the castle and its current role in European culture and identity. 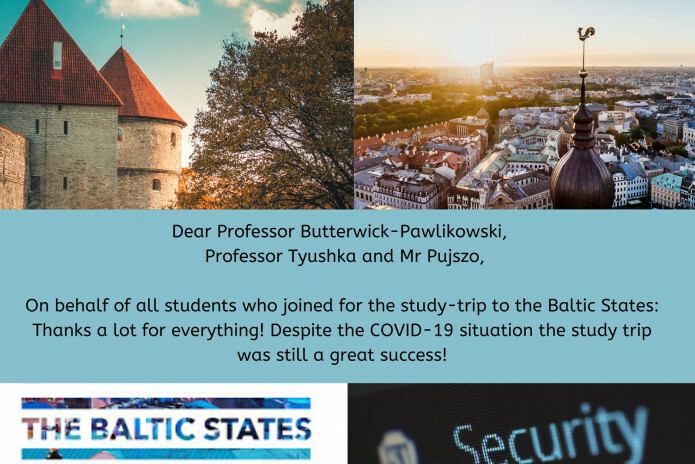 This series of online meetings began with a comprehensive overview of global security challenges by Mr Jānis KAŽOCIŅŠ, Advisor of the President of the Republic of Latvia. The programme subsequently featured two experts from NATO STRATCOM COE, Ms Nika ALEKSEJEVA and Mr Giorgio BERTOLIN, who discussed the nature of strategic communication, provided an overview of misusing social media to political ends, and shared a number of guidelines on how to recognise inauthentic behaviour online.

Later the students took part in two mini-panel discussions with a group of experts from the Centre of EU-Russia Studies at the University of Tartu: Prof. Andrey MAKARYCHEV, Assoc. Prof. Stefano BRAGHIROLI, Dr Piret EHIN, Dr Mihkel SOLVAK, and Ms Maili VILSON. They tackled such topics as recent developments in the relations between the European Union and Russia, Estonia’s citizenship policies vis-à-vis national minorities and stateless people, as well as the functioning of the Estonian e-voting system. The group learned also about the basic principles of Estonia’s “whole-of-society” approach to territorial defense from Colonel Eero REBO of the Estonian Defence League.

Then NATO CCD COE representatives, Dr Piret PERNIK and Ms Liina LUMISTE shared their expertise on cybersecurity, challenges of attribution of cyber operations, and applicability of existing international legal frameworks to cyberspace. Later the same day, the e-discussion with Colonel REBO was followed up by an intellectually stimulating online meeting during which Mr James SHERR and Mr Sven SAKKOV offered insights into the Russian government’s geopolitical mind-set, drew attention to the most pertinent security considerations in the Baltic Region, and discussed contemporary relevance of different concepts of deterrence.

Subsequently, Natolin students had an opportunity to learn about the structure, activities and analytical insights of the European Centre of Excellence for Countering Hybrid Threats from its two Directors – Ambassador Kirsti NARINEN and Dr Hanna SMITH. Finally, Dr Mikael WIGELL, Programme Director of the Global Security Research Programme at the Finnish Institute of International Affairs, shared an analysis of hybrid interference methods and presented a notion of democratic deterrence.

Jordan’s domestic and regional challenges after the Arab Spring 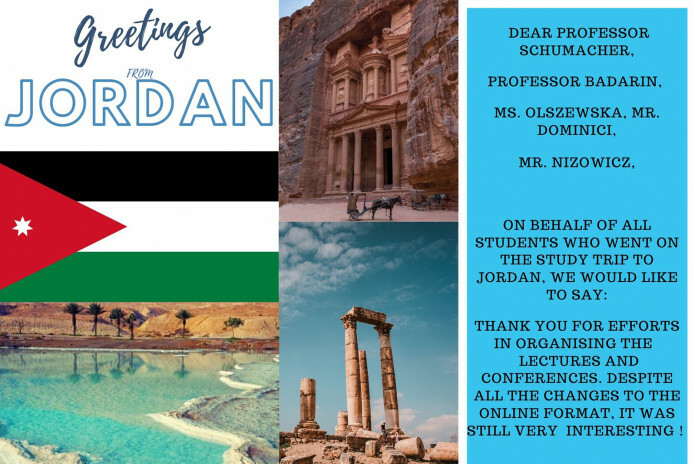 In this series of online meetings, Natolin students discussed domestic and regional challenges that Jordan has been faced with ever since the outbreak of the Arab uprisings in early 2011.

Renowned academics, think tankers, practitioners, politicians and journalists from Jordan and beyond addressed issues of paramount importance to Jordan, such as the impact of the Syrian war, political reforms and transition, moderation and extremism, the Palestinian Question, the newly emerging geopolitical order in the EU's southern neighbourhood and its impact on Jordan, as well as the issue of energy security, across seven panels.

The discussions provided students with a unique opportunity to deepen their knowledge of Jordan – an important EU partner country in the framework of the European Neighbourhood Policy – and its domestic and regional challenges.

Dealing with the past, consolidating democracy and the EU membership perspective in the Western Balkans 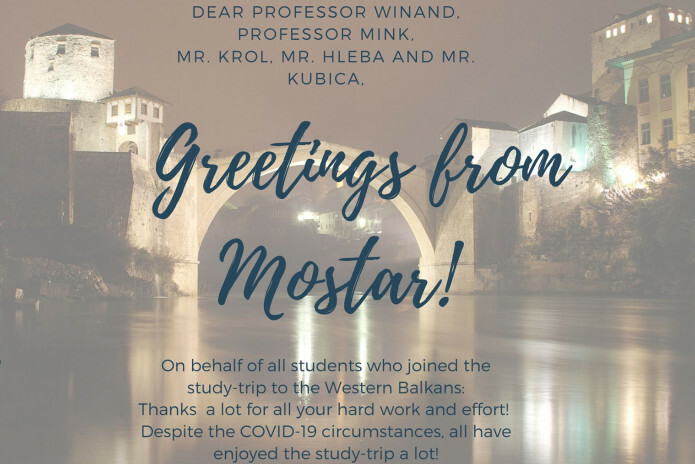 Under this theme, students had a chance to meet scholars, decision-makers, journalists and representatives of NGOs based in Bosnia and Herzegovina, Montenegro and Serbia.

Connected with Belgrade, they discussed, inter alia, the EU’s role in reforming Serbia and in the process of normalization of Serbia-Kosovo relations with the Head of the EU Delegation, Ambassador Sem FABRIZI, and the state of play of the country’s accession to the EU with Acting Assistant Minister Dejan RALEVIĆ, Head of the EU Sector at the Serbian Ministry of Foreign Affairs. The scholarly perspective on the current status of the EU enlargement process and its revised methodology was delivered by Prof. Jovan TEOKAREVIĆ from the University of Belgrade, accompanied by Dr Vladimir MEĐAK, Vice-President of the European Movement in Serbia, and Ms Milena LAZAREVIĆ, Programme Director at the European Policy Centre and Natolin alumna.

Mr Igor NOVAKOVIĆ from the International Affairs and Security Center presented the pivotal topic of non-Western actors’ activity in the region, whereas Mr Peter TABAK, Chief Economist for the Western Balkans at the European Bank for Reconstruction and Development, elaborated on the question of financing the reforms and how the middle income trap can be avoided in the Western Balkans. Questions of memory and reconciliation were expertly addressed by Prof. Dubravka STOJANOVIĆ, while the issues pertaining to democratisation and media freedom were critically assessed by Mr Milan ANTONIJEVIĆ from the Open Society Foundation and Ms Ljubica GOJGIĆ from RTV Vojvodina.

Connected from Sarajevo, Mr Krassimir NIKOLOV from the EU Delegation provided the students with the general picture of the EU’s involvement in Bosnia and Herzegovina, while Dr Thomas WIDRICH, Political Advisor to the EU Special Representative and COMEUFOR, shed light on peace-keeping engagement of the EU in the country. Problems of media freedom and the journalists’ role in BiH and the Western Balkan region at large were expertly discussed by Ms Marija RISTIĆ, Regional Director of the Balkan Investigative Reporting Network, and Mr Dejan ŠAJINOVIĆ from Nezavisne Novine. The role of civil society in reconciliation and democratisation was the topic of the intervention by Ms Danira KAROVIĆ from the Citizens’ Association Why not? and Mr Adis HUKANOVIĆ from the Civil Peace Service Forum.

The online panel in Podgorica with Ms Daliborka ULJAREVIĆ from the Center for Civic Education and Ms Jovana MAROVIĆ from the Politikon think-tank, as well as the fireside chat with Mr Momčilo RADULOVIĆ, President of the European Movement in Montenegro, allowed the students to explore the political situation in this country and its EU path through the lens of civil society and independent experts. Additionally, students were offered virtual tours of the cities of Belgrade, Sarajevo, Mostar, Cetinje, Kotor and Dubrovnik.

At the end of this virtual study trips week, the Natolin students of the Hannah Arendt Promotion made the very kind gesture of sending Thank You Postcards to the Vice-Rector and all Natolin staff members involved in the organisation of the study trips online programmes.