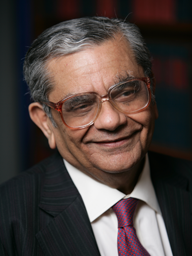 Public Lecture by Professor Jagdish BHAGWATI: "Reducing Poverty in the World: What have we Learnt?"

Attendance was open and free of charge. 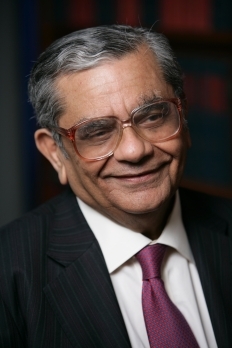 Professor BHAGWATI gave a talk on "Reducing Poverty in the World: What have we Learnt?". He cited the new Pope's emphasis on the poor rather than the recent diversion by the Occupy Movement to focus on the rich. But the question remains: how is poverty to be effectively reduced? Here, Professor BHAGWATI, who addressed this very issue in India when he was working on the problem, drawed on India's experience and the lessons it offers to the Pope and others in finding effective ways to reduce poverty. He drawed on the recent book he has published with Professor PANAGARIYA, WHY GROWTH MATTERS, which precisely tackles this issue, and which was recently selected as one of the Best Books of 2013 by the Financial Times.

A drink followed the conference.

About the key-note speaker:

Jagdish BHAGWATI, University Professor at Columbia University and Senior Fellow in International Economics at the Council on Foreign Relations, is a prominent economist. He has made pioneering contributions to the study of development, globalisation, international trade, foreign aid and immigration. He also writes frequently for leading media worldwide. He has served in many advisory roles, includingat the GATT as Economic Policy Adviser to Director General Arthur DUNKEL and at the UN to Secretary General Kofi ANNAB on Globalization and on NEPAD Process in Africa. The recipient of many honorary degrees and prestigious prizes, he has been uniquely presented with six festschrifts written in his honour. He has also worked with many NGOs and organisations linked to NGOs[HE1] , including Human Rights Watch.

Carol COSGROVE-SACKS is Visiting professor at the College of Europe. Carol COSGROVE-SACKS (UK) is a highly respected expert on multilateral and EU negotiations. She has worked for the European Commission and has run EU training courses at the Civil Service College. From 1994-2005 she was Director of Trade in the United Nations Economic Commission for Europe in Geneva, Switzerland. She is currently a Visiting Professor at the College of Europe in Bruges, at the Europa Institute Basel, Switzerland, and at the Centre for Euro-Asian Studies at Reading University, UK.

Robert C. HINE is Visiting Professor at the College of Europe since 1986. His research focuses on intra-industry trade, trade and employment, European trade policy, agricultural policy. He has published papers in The Economic Journal, the European Journal of Political Economy, the Review of International Economics, Weltwirtschaftliches Archiv, World Economy , etc. Books include The Political Economy of European Trade, Global Protectionism and The Reform of the Common Agricultural Policy.

James MACKIE is Visiting Professor at the College of Europe. He works at the European Centre for Development Policy Management (ECDPM) in Maastricht, Netherlands, where he is Senior Adviser EU Development Policy. Before joining ECDPM in 2002, James MACKIE worked for twenty years in the development NGO sector, latterly as the Secretary General for the European NGO umbrella group, the NGDO-EU Liaison Committee (now CONCORD). He also worked for the British NGO VSO in Asia and Africa and in their headquarters in London on programme funding. He holds a PhD in Geography from the School of Oriental & African Studies (SOAS) of the University of London.

Attendance is open and free of charge, but seats are limited: registration is compulsory. Please register before 17.03.2014.