The patron of the MATA class of 2021-2023 is Amelia Mary Earhart. Amelia Earhart (1897-disappeared 1937) was a US aviation pioneer, women’s rights activist and author.

Born in Atchison, Kansas, Earhart was fascinated by aviation early on in her life. At the age of 24, she began to take her first flying lessons and to save money to purchase her own plane. She quickly went on to become a record-setting pilot. In October 1922, by flying an Airster to 4300 m, she set a global altitude record for female pilots. She was also the first female passenger to cross the Atlantic on a flight in June 1928, an experience she documented in her first book published during the same year. Her best-known record, however, is that of being the first female aviator to fly solo across the Atlantic Ocean. On 20 May 1932, she took off from Newfoundland heading to Paris. Due to bad weather conditions, she was forced to land close to Londonderry, Northern Ireland, completing her transatlantic journey. Further records followed: in January 1935, for instance, she became the first person to fly solo across the Pacific from Honolulu to Oakland, California.

Making use of her standing as a record-breaker in the male-dominated field of aviation, Earhart also gained a reputation as an avid defender of gender equality, as evidenced also by her support to the Equal Rights Amendment. She made it her mission in life to break down gender barriers, serving as a role model for women both within and beyond aviation sector, in the US and the broader transatlantic space. In this vein, she perceived her accomplishments in the field of aviation not only as personal achievements, but as proof that women deserved equal opportunity. Earhart drew from the symbolic capital of her feats to articulate new visions of women in society. Her career as visiting professor counselling women in their careers at Purdue University is a proof of this attitude. Her overall ability and willingness to shape and mould discussions about femininity during the 1920s and 1930s inspired a transformation in societal attitudes at the time, affording her a unique place in the history of feminism.

Earhart had a special connection to Boston. In 1925, she spent some time working as a social worker at Denison House, a women-run settlement house in Boston’s South End. During this time, she lived in Medford, MA, where the Fletcher School is located.

In July 1937, Earhart's plane disappeared during a flight from Lae Airport in Papua New Guinea to Howland Island in the middle of Pacific Ocean. She was declared legally dead in January 1939.

Her role as a bridge-builder across the Atlantic, her life-long fight for gender equality and women’s rights, and the inspirational role she played for many women across the entire transatlantic space and beyond, make Amelia Earhart a particularly suitable MATA patron.

More information about Amelia Earhart can be found here. 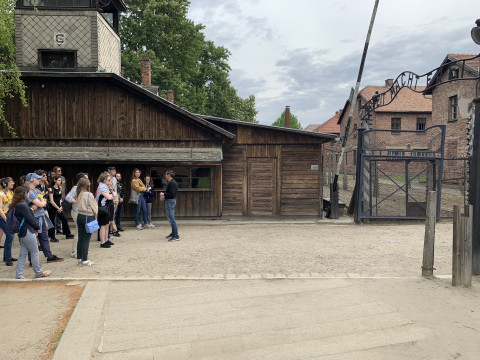 On Friday and Saturday (20 and 21 May 2022), over one hundred Natolin students and staff members participated in a two-day educational visit to the Former German Nazi Concentration and Extermination...
Read more
END_OF_DOCUMENT_TOKEN_TO_BE_REPLACED