Historikerdialog by Aline SIERP and Philippe PERCHOC: Unifying Divisions – Politics of Memory in the European Union

In this lecture Dr Aline SIERP scrutinizes the EU’s attempts to create an overarching European memory framework. By analyzing different EU politics of memory initiatives on the one hand and national reactions to them on the other, she asks whether there can be such a thing as a European memory. She argues that a European perspective attempts to break the mould of single national perspectives by integrating them into a common identity and value framework. Through the promotion of social interactions on the subnational level and the creation of a communicative arena, the EU acts as a facilitator for the transnationalization of debates on memory.

Examining Belgian and German Schoolbooks on WWI: a Historians' debate

The European General Studies Programme of the College of Europe will host a 'Historikerdialog' in partnership with the Belgian Centre for Historical Research and Documentation on War and Contemporary Society (CEGESOMA) and the German Embassy in Brussels open to the public.

EG Debate The Greek Crisis: Deviance from European Modernity or Change of Paradigm ?

Date: 4 March 2014 - 20:00
Place: Bruges Campus (Dijver Room E)
The European General Studies programme organizes a debate on "The Greek Crisis: Deviance from European Modernity or Change of Paradigm ?" with Professor Nikikforos DIAMANDOUROS, Professor Ruby GROPAS, and with the participation of the Greek students.

The European General Studies Programme of the College of Europe (Bruges) organizes -in cooperation with the International Committee of the Red Cross- a 2,5 days Introductory Seminar on International Humanitarian Law for students (progamme &invitation). The programme will be delivered in both English and Franch.

The course is open to students of the College of Europe, and also to students currently attending a postgraduate programme in european Law/politics in Belgium, the Netherlands, Luxembourg, and border universities of France, Germany and the United Kingdom. A certificate of attendance will be awarded to the participants who followed the programme. Participation is free of charge, but registration is requested (as from 25 February 2014).

Registration deadline is 16 March 2014. We would very much welcome your presence and participation.

Public Lecture by Professor Jagdish BHAGWATI: "Reducing Poverty in the World: What have we Learnt?"

Attendance is open and free of charge, but seats are limited: registration is compulsory. Please register before 17.03.2014.

The International Committee of the Red Cross (ICRC) and the European General Studies Programme of the College of Europe are pleased to announce the 14th Bruges Colloquium on International Humanitarian Law.

This year's edition will focus on the " Vulnerabilities in Armed conflicts: Selected Issues ". The Colloquium will be held in Bruges on the 17th and the 18th of October 2013.

The Colloquium is designed to encourage an open exchange of views, among and between both experts and non-specialists interested in the subject.

The participation is limited and on invitation only.

The International Committee of the Red Cross (ICRC) and the European General Studies Programme of the College of Europe are pleased to announce the 13th Bruges Colloquium on International Humanitarian Law.

This year's edition will focus on the " Scope of Application of International Humanitarian Law ". The Colloquium will be held in Bruges on the 18th and the 19th of October 2012.

The Colloquium is designed to encourage an open exchange of views, among and between both experts and non-specialists interested in the subject.

Workshop on "The European Citizens' Initiative - a First Assessment"

The European General Studies Department organised on 25 January 2011, a workshop on the topic "The European Citizens' Initiative - a First Assessment".

A career event on job opportunities in the area of development cooperation took place on Tuesday, 29 March at 20:30 in Room E (Dijver).

As an annual tradition, the European General Studies Department organised an informal debate on "Development Job Search" for the students of the College.

Michael KÖHLER from the European Commission, Thierry BRUN from the World Bank and Jan VANDEMOORTELE, former UN official, offered information about career opportunities in development and shared their experience with the students.

The event was open to all departments.

Minister Frank VANDENBROUCKE delivered a speech "Social Europe: Lessons from the Past, Perspectives for the Future"

On 5 April, Minister Frank VANDENBROUCKE delivered a speech entitled "Social Europe: Lessons from the Past, Perspectives for the Future".

The question of social Europe is both topical and crucial for European integration. Since the very beginning of the establishment of the internal market, social policies have been its important complement. One of the present‐day challenges is to preserve the European social model, and reform the social benefits systems in order to help maintain the budgetary equilibrium. The necessity to reform the social model, in order to enhance the well‐being of European citizens, and the competitiveness of the European economy, was confirmed both by the Lisbon strategy of 2000 and the recent “Europe 2020” strategy. However, in order to determine what has to be done, it is necessary to be aware of what has been done so far.

The speech delivered by Mr Frank VANDENBROUCKE is therefore timely. He has not only contributed to the social questions as a practitioner and politician, but also as a scholar. To mention just a few of his recent political functions: he was Minister for Social Affairs and Pensions (1999-2003) and for Employment and Pensions (2003-2004) in the Belgian Federal Government, and Minister for Employment, Education and Training (2004-2009) in the Flemish Government. Since 2009, he has been Minister of State and since 2010 Senator. On the academic level, one must mention that in 1999 he was awarded a Doctorate in Philosophy (DPhil) by the Faculty of Social Studies at Oxford University for his dissertation dealing with the concept of “active social state” and which became a true frame of reference for public action.

The College of Europe (European General Studies) and the United Nations University (Comparative Regional Integration Studies) organised jointly a Round-table on “Re-thinking the Role of Regionalism: Perspectives from Asia and the Americas” which took place on 13 April 2011, at the College of Europe.

The purpose of the seminar was to revisit the debate on regional integration from two distinct regional perspectives - the Americas and South-East Asia.

The debate was launched by Professor Pierre SAUVÉ, Visiting Professor at the College of Europe, Deputy Managing Director and Director of Studies at the World Trade Institute, University of Bern. His introduction was followed by two presentations: Mr Roberto ECHANDI, Director of the International Investment Initiative at the World Trade Institute, University of Bern and former Ambassador of Costa Rica to the EU, focused on the case of the Americas, and Professor Cédric DUPONT, Professor of International Relations at the Graduate Institute of International Studies, Geneva, presented the case of regionalism in South-East Asia.

The presentations were followed by comments from two discussants, Dr Stephen WOOLCOCK, Programme Director for the Masters in International Political Economy at the London School of Economics, Director of the International Trade Policy Unit at LSE, as well as Associate Research Fellow at UNU-CRIS, and Mr Christophe KIENER, Assistant to the Deputy Director-General, DG Trade, European Commission. 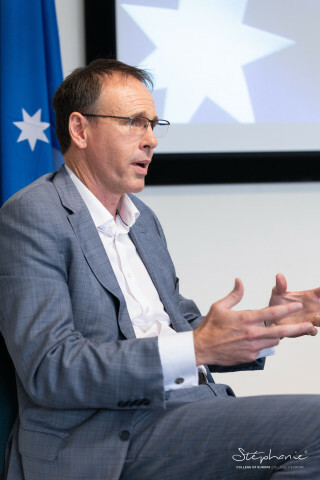 On 30 September 2021, Dr David Dutton, Deputy Head of Mission of the Australian Embassy in Brussels, engaged in a talk with Professor Sieglinde GSTÖHL, Director of the EU International Relations and...
Read more
END_OF_DOCUMENT_TOKEN_TO_BE_REPLACED