From 7 to 15 April 2018, students of the College of Europe Natolin campus embarked upon one of four tailor-made second semester study trips to different destinations within the European Union and at its borders.

The 2018 second semester study trips offered students the opportunity to apply the knowledge gained in the first and second semesters and to carry out research for their Master's theses.

Regular updates on the study trips were published on our Facebook and Twitter pages. Look for #NatolinOnTour to learn more about our activities!

Watch the picture gallery and discover below where Natolinians had the chance to go this time: 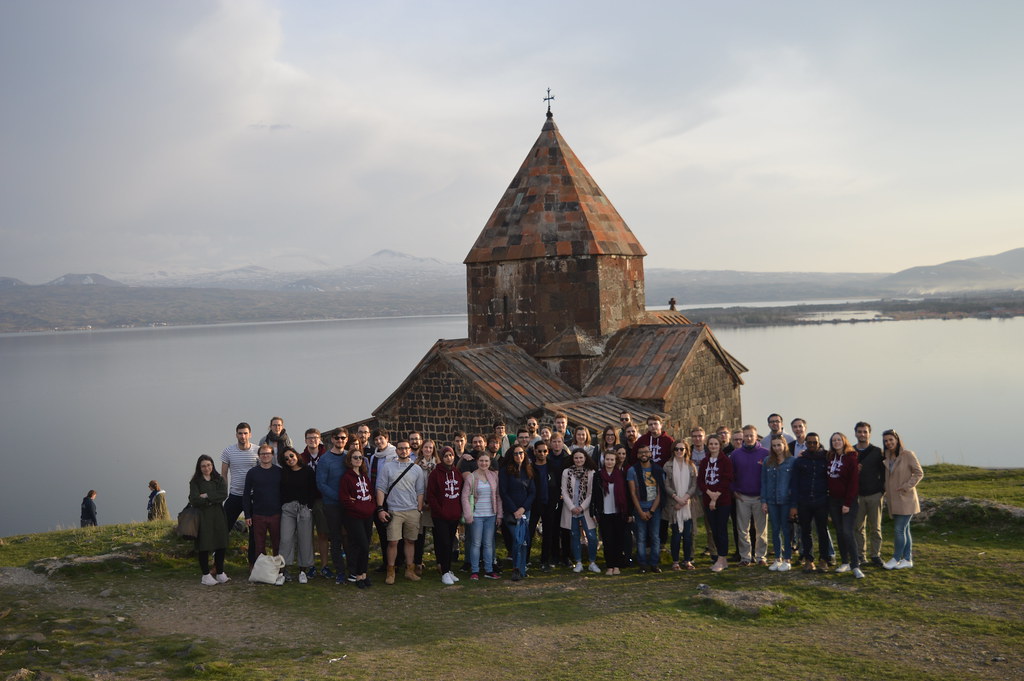 "A Post-War Reconciliation? The Western Balkans on the Way to the EU"

This year, the College of Europe in Natolin, decided—for the first time— to offer its students the opportunity to discover the Western Balkan region in greater depth by travelling to Serbia, Kosovo, and the Former Yugoslav Republic of Macedonia (FYROM).

In light of the growing importance of the region in the enlargement agenda of the European Commission, this trip aims to tackle the countries’ aspiration to seek closer ties with the EU. Going beyond the technical aspects of the integration and negotiation processes, the group of 24 students will be confronted with the multifaceted identity of a region that is still in the process of a post-war transition and reconciliation. The question of how the region’s leaders can foster peaceful neighbourly relations, while still overcoming the legacy of the Yugoslav War, formed the backbone of the trip’s academic programme.

Over the course of six days, the students were given the opportunity to meet and engage in discussions with internationally recognized scholars and think tank experts, high-level officials from across the entire political spectrum, local activists and leading human rights defenders.

In Belgrade, the students learned about Serbia’s EU accession process; ideas of transitional justice; human rights and reconciliation; and about the legacy of the Yugoslav wars. In Kosovo, they visited Mitrovica, where Albanians and Serbians have developed a dual city government. This offered a fascinating look into how two ethnicities can cohabit under a single state. In Pristina, the study trip addressed the reconciliation efforts in the region, the challenges of peace keeping and state building and Kosovo’s EU aspirations. The last stage of the trip led the group to Skopje, where they explored FYROM’s EU accession process. There, they also attended a conference on "regional security and neighbourly relations in the Western Balkans", which allowed them to look at the wider region as a whole.

Students also had the opportunity to meet members of local NGOs, learn about the life of regional civil society activists, and think deeply about the everyday realities of democratic consolidation. Since it is crucial to understand the region’s history if one is to fully grasp its complex identities, the trip also offered a series of guided visits, which allowed the students to discover historical and cultural heritage of the region.

The study trip to the Western Balkans provided students with invaluable access to first-hand knowledge and expertise in the regional study of the Western Balkans and the ongoing debate on EU enlargement policy. On top of that, it was an intense immersion into the cultural diversity of this region of the European continent.

"The Challenge of Coping with Complexity, Insecurity, and External Influences: Whither the South Caucasus?"

The visit allowed students to engage with civil society activists, academics, policy-makers, and distinguished politicians of the visited countries, as well as representatives from international organisations, most notably the European Union. In addition, students had the chance to visit exceptional natural, cultural, and historical landmarks, such as Lake Sevan, Haghpat Monastery, or the Armenian Genocide Museum, as well as to meet with College of Europe alumni currently resident in Tbilisi and Yerevan.

All in all, the study trip allowed students to acquire first-hand experience and knowledge of the visited countries, giving them in-depth knowledge of recent political, societal, and socio-economic trends and developments in the South Caucasus, inter alia the issues of democratisation and economic modernisation; the activity and challenges faced by civil society; the role of unresolved territorial conflicts; the influence of external powers, most notably Russia, Turkey, or Iran; and the role and limits of the EU’s transformative power in its neighbourhood. Last but not least, the study trip offered students a unique opportunity to familiarise themselves with Georgia and Armenia’s distinct national cultures, history, legacies and traditions.

THE BALTIC STATES AND KALININGRAD

"After Hybridity: Rhetoric and Reality of Baltic and European Defence and Security"

The 2018 edition of the study trip to the Baltic region – that is the three Baltic states of Estonia, Latvia and Lithuania as well as Russia’s Kaliningrad exclave – tackled the highly topical issues of regional and wider European security in times of hybridity broadly seen. Headlined-themed "After Hybridity: Rhetoric and Reality of Baltic and European Defence and Security", this study trip aimed to familiarize students with mainstream academic and political narratives, on European security in times of uncertainty – from general security-related problems, the region’s peculiar posture and role in the Euro-Atlantic security policies, soft and information security matters (national minorities, contested identities, domestic-foreign political dynamics, direct exposure to information and social media warfare of sorts, etc.) to hard and hybrid security concerns (including the Russia’s ‘traditional’ energy leverages as well as nowadays increasing military build-up in the region’s vicinity and the ‘hybrid warfare’ challenge to the wider Baltic-Nordic area). The study trip also provided the access to the first-hand expertise on the topics of smart and cyber security (e-governance, digital market/union, cyber security, state and societal resilience), that formed the agenda of Estonia’s 2017 EU Presidency. Given that the region concerned is essential in elaborating the European Union’s common foreign, security and defence policy, including its Russia policy, the trip also aimed to familiarize students with the problems of the current EU-Russia relationship and the prospects for their future strategic interactionism.

During this study trip, a group of twelve students and three faculty members of the Natolin campus of the College of Europe had the unparalleled opportunity to visit some of the region’s most renowned centres of excellence in research and education on different aspects of security and defence in Europe. Academic panels and public discussion sessions, scheduled in Estonia (Tallinn, Tartu), Latvia (Riga), Lithuania (Vilnius/Plokštinė, Šiauliai) and the administrative capital of the Russian Kaliningrad oblast, offered first-hand insights from current political elite representatives, policymakers and policy shapers in the region, as well as institutional centres of excellence and academia. Among others, the students visited the Estonian Parliament (Riigikogu), the European Union’s Representation in Estonia, the NATO Cooperative Cyber Defence Centre of Excellence, the International Centre for Defence and Security (ICDS/RKK), the University of Tartu, and the Baltic Defence College. The cultural programme offered sightseeing tours and museum visits, including the KGB Museum in Tallinn, the Immanuel Kant Museum in Kaliningrad, and the Plokštinė Missile Base – Museum of Cold War in Lithuanian Plateliai Lake area.

The 2018 Baltic Study Trip therefore enabled not only valuable access to first-hand knowledge and expertise in the field of contemporary (European) security studies, but also allowed for a brief but truly eventful and experiential insight into regional-cultural diversity.

This year’s study visit to Brussels and Luxembourg entitled "The EU in Crisis: Managing Instability, Seeking Opportunity" aimed at assessing through critical discussions the evolutions of EU politics and policies since 2014, especially in the field of its international actorness. Indeed, be it as a "normative power" or an "economic giant", the EU’s place on the international stage has, for a long time, been seen as one of its assets. However, more than a decade of crisis has shattered its credibility and capacity to act as a global and regional player. The Brexit vote, with the economic and political consequences it entails, is but the most striking example of how the current events have shown the necessity for the EU to rethink itself both internally and internationally. If Jean MONNET was to be proven right that "l'Europe se fera dans les crises et elle sera la somme des solutions apportées à ces crises", the EU now needs to come up with solutions to its challenges, claim its international position and enhance its prospects for its very survival. With twelve years of challenges and difficulties, the EU has indeed had time to imagine and implement a certain number of solutions which now shape its action and way of working. This study trip offered to go through some of the most topical ones, to discuss their relevance, their management and their achievements (or lack thereof).

The visit gave our students a chance to meet and discuss with first-hand practitioners of EU politics from a wide range of EU institutions – such as the European Commission, the European Parliament, the Court of Justice of the European Union or the European Investment Bank – and EU bodies – such as the European External Action Service or Eurostat – to acquire an inside knowledge of the practicalities of the day-to-day creation or implementation of EU policies. External partners also were consulted, with visits to journalists, think-tanks or international institutions like NATO. Altogether, the trip allowed the students to grasp an encompassing view of the most recent evolutions around issues such as trade, defence or economic relations with third countries, and to evaluate the state of affairs in the EU. Special attention was devoted to the political initiatives of the current Commission and their outcomes.

With the 2019 round of European elections drawing near, it indeed remains open as to whether the EU contributed in restoring the Union’s credibility as a necessary tool, or whether it drew citizens further away from an organisation they have grown increasingly sceptical about. The first challenge for the EU therefore remains to try and rebuild some sense of common belonging among its members, still divided by diverging views on the sources of, and therefore the solutions to, the crisis.