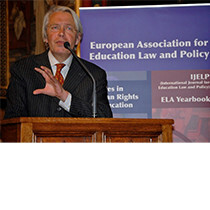 Workshop offered: Scenarios for the Future of the EU (8h)

De Groof is/was - besides his position as Government Commissioner for Universities (Flemish Community, Belgium) and former Chef de Cabinet of the Minister of Education and Training - professor at Tilburg University (the Netherlands), at the National Research University – Higher School of Economics in Moscow and extraordinary professor at the North West University, Potchefstroom (South Africa) and previously at Ghent University (Belgium). De Groof is/has been visiting professor and/or taught at universities worldwide.

A. Books as Author, Editor or Co-Editor (in English):

B. Chapters in books (in English or French / Spanish / Portuguese):