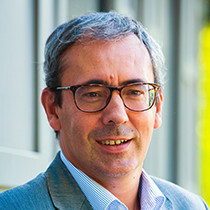 Jean Hindriks is Head of Economics School of Louvain. He also served as co-director of Center of Operations Research and Econometrics (CORE) and as director of Postgraduate Studies in Economics at the UCLouvain.

He is a senior fellow and founding member at the Itinera Institute. He is member of the Belgian Academic Board of Pension (November 2015-present) and was member of the Belgian Commission for Pension reform 2020-2040 (April 2013 - June 2014). He was also a member of the Belgian Scientific Committee for the Price Analysis (2012-2018). He is the author of the worldwide used textbook (with Gareth Myles) “Intermediate Public Economics” (2nd Edition) The MIT Press 2013. He is associate editor of the Journal of Public Economic Theory.  He was on the editorial board of Fiscal Studies (2007-2014) and the European Journal of Political Economy (2006-2009).

The research of Professor Hindriks evolves around taxation, education, pension, political economy. He has published widely and internationally on issues of public economics and political economy