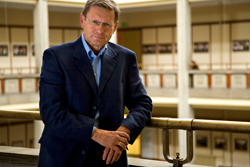 Professor of Economics at the Warsaw School of Economics,
Former Deputy Prime Minister of Poland and Minister of Finance,
Former President of the National Bank of Poland,
Founder and Council Chairman of Civil Development Forum Foundation (FOR),
Doctor honoris causa of several universities, distinguished with prestigious awards and decorations, including the Medal of White Eagle.

Education
Leszek Balcerowicz, born in 1947, graduated with distinction from Foreign Trade Faculty in Central School of Planning and Statistics in Warsaw (CSPS), now Warsaw School of Economics (WSE), in 1970. In 1974 he gained an MBA at St. John's University in New York; in 1975 received his Ph.D. in economics at the CSPS. Among his academic distinctions are visiting fellowships at the University of Sussex (1985), the Marburg University (1988), the Stanford University (2011). Since October 1992 Leszek Balcerowicz has been a Professor at WSE and a Head of Department of International Comparative Studies.

Political posts
Leszek Balcerowicz is the architect of Poland's economic reforms initiated in 1989 - he designed and executed the radical stabilization and transformation of Polish economy since the fall of communism in Poland. In September 1989 Leszek Balcerowicz became Deputy Prime Minister of Poland and Minister of Finance in the first non-communist government in Poland after the Second World War. He was also President of the Economic Committee of the Council of Ministers. He retained his positions in the government until December 1991. From April 1995 to December 2000 he was the president of the Freedom Union, a free market - oriented party and from 1997 to June 2000 he was Deputy Prime Minister, Minister of Finance and President of the Economic Committee of the Council of Ministers. In 2001-2007 he was the governor of the Central Bank of Poland.

Awards
In 1992 he was awarded the Ludwig Erhard Prize from the Ludwig Erhard Foundation, Germany. In 1998 Leszek Balcerowicz received "Finance Minister of the Year" title from the British financial monthly "Euromoney". In 1999 European Institute of Washington granted him "Transatlantic Leadership Award" for the most outstanding European personality in 1998, and he received the Central European Award for the Finance Minister of the Year 1998 in Central and Eastern Europe. In 2001 he was awarded the Friedrich von Hayek Prize, Germany; in the same year he received the Carl Bertelsmann Prize for his achievements during the process of transformation of the Polish economy. In 2002 the Fasel Foundation honored him with a prize for his merits for the social market economy. In January 2004 British monthly "The Banker" recognized Leszek Balcerowicz as central banker of the year for Europe. In October 2004 he was granted the annual "Emerging Markets Award" for the best president of a central bank in Central and Eastern Europe. In 2006 voted by FT.com readers one of five winners in the Pioneering Thought Leadership Project. Awarded Poland's highest decoration - Order of the White Eagle - for his contribution to the system transformation (2005). In 2008 the Leontief Center in St. Petersburg (Russia) awarded him Leontief Prize for outstanding contributions to economic theory. Polish catholic weekly “Tygodnik Powszechny” awarded him St. George’s Medal for “building good in social life” in 2008. In 2009 he was featured in documentary “It was a plan” by Andrzej Fidyk, showing his reforms securing Poland’s transition from socialism to market economy. In 2010 Polish television (TVP) honored him with its most popular achievement award “Superwiktor”. In June 2010 he received “Jan Nowak-Jeziorański” Award for his outstanding contribution to Polish transformation.