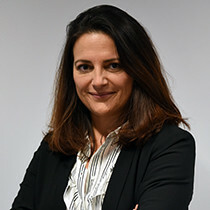 Stéphanie Horel is a Programme Officer at the EU Delegation to Brazil. She is in charge of the climate change and environment portfolio of actions of the Foreign Policy Instruments (FPI) for the Americas. Before joining the European Commission, she worked for 8 years as an independent expert with various stakeholders on short term and long-term assignments for projects financed by the European Union and other Institutions (Council of Europe, UNESCO).

Between 2011 and 2015 she was Team Leader of an ENP Project for developing capacities in EU Affairs in the Public Administration of the ENP Countries. Between 2004 and 2009, she was Lecturer and Coordinator of a MEDA Regional Programme (EuroMed Training of Public Administration Programme) at the European Institute of Public Administration (EIPA).  Previously, she worked as legal advisor on public procurement and Project Manager in different Organisations (Centre National de la Recherche Scientifique, DG Research of the European Commission) where she developed and managed projects funded with R&D and innovation funds and European Regional Development fund.