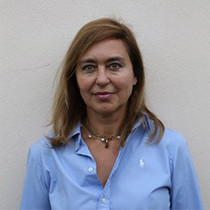 Helena Rêgo (PT) is an advisor for the Secretary General for the Portuguese Republic’s Intelligence System (SGSIRP). Previously, she was Director of Human Resources and Intelligence training (SIRP) from 2013 to 2020, and worked as an analyst between 1988 and 2013. From 1995 onwards, she was the director of several operational departments of the Portuguese Intelligence Security Service (SIS).

She is an expert in Iinternational Relations at the Portuguese Institute of Social and Political Sciences (ISCSP) and holds a PhD in International Relations, with a focus on intelligence analysis and security issues (Intelligence of States). She also holds a Master’s degree in International Relations focused on Russia (book The New Russia) from the ISCSP and a Law Degree from the Classical University of Lisbon. From 2013 to 2020 she lectured for and coordinated post-graduate studies on Structured Analytical Techniques and Intelligence at Nova University in Lisbon. She was a visiting Assistant Professor at the Classical University of Lisbon’s Law School (1985-1987) and at the Superior Institute of Political and Social Sciences (1992-2009).

As the director of Counter Terrorism for 10 years, she participated in the creation of the Counter Terrorism Group CTG (European intelligence) in 2001 and was the President of the Terrorism Working Group (TWG) of the European Council during the Portuguese Presidency of the EU in 2007. She was also jointly responsible for the security of several major events (Expo 98; Pope visits; NATO summits). Moreover, she was SIS representative at the Anti-Terrorism Coordination Unit (UCAT) between 2003 and 2004. Since 1988 she gives training in all SIS and SIRP (intelligence) courses. She has been a jury member for several theses and gives tutorials for post-graduate work at Nova University Lisbon; Institute of National Defense; Institute for Law Enforcement and Security Studies (ISCPSI) and Air Force High Studies Institute.

Helena Rêgo is the author of several peer-reviewed articles dealing with different aspects of security and intelligence. Her latest articles include: