Given the importance of the revolutions in the recent history of Ukraine the project aims to analyse the three most significant protests which have taken place in Ukraine since 1990:

The last three decades of the history of Ukraine has been marked by three waves of protests at Independence Square (Майдан Незалежності) in Kyiv whose scale and impact have attracted the attention of international public opinion. The Revolution on Granite in 1990 was the first of these protests, leading, for the first time in the history of the USSR, to a high-ranking official’s resignation under the pressure of public opinion, and prefiguring the revolutionary demonstratations of the following years. The revolutions of 2004/2005 and of 2013/2014 were exceptional in terms of their scale and impact on EU and American policies in the region. In particular, the events of 2013/2014, internationally known as ‘the Euromaidan’, met with wide European and international responses. ‘Maidans’ supporting the protests in Ukraine gathered in London, Vienna, Warsaw and New York. Moreover, the protests brought about a pro-‘Western’ change in Ukrainian politics. This allows us to perceive Ukrainian revolutions as milestones in the country’s road to integration with the ‘West’ in general, and the EU in particular. 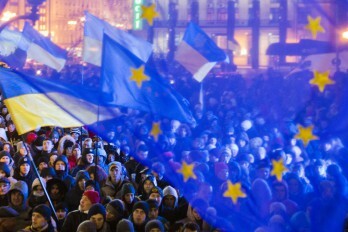 To contextualize our research, we look at  three dimensions: first we treat the Maidan protests as a part of Ukrainian political culture, second we apply the theoretical framework of contemporary studies of revolutions, asking whether the protests were ‘refolutions’ (the phrase coined by Timothy Garton Ash), or whether the changes introduced by them in fact only affected the governing circles. Finally, we compare the Ukrainian revolutions to the third and fourth wave of democratization, that is, to the fall of Communism in Central and Eastern Europe in 1989, and to the ‘Colour’ revolutions in the post-Soviet space in the 2000s.

Our goal is, firstly, to provide a multi-dimensional analysis of the events in Ukraine. Additionally we want to stimulate further academic debate and leave the College of Europe’s mark on it. To achieve this, we plan to interview selected participants and leaders of the 1990, 2004/2005 and 2013/2014 protests. The analysis of these oral history sources together with media and documentary accounts of the revolutions will allow an interdisciplinary study of contemporary revolutionary movements in the post-Soviet space. Furthermore, by making our oral history repository publicly available, we hope to present students of modern Ukrainian history, society and politics with unique research material.

Our team invited leading experts in modern Ukrainian studies to collaborate with our team aiming at establishing a network of research centres in Ukraine, Poland, the UK, France, the USA and Canada. During a series of conferences, increasing in scope and scale, we shall develop and assess effective research tools, reflect on the state of the art, and, finally, to take part in the debate on the meaning and impact of popular protests on contemporary Ukraine.

We warmly welcome any queries, comments or suggestions related to the project. To contact us visit the contacts page.