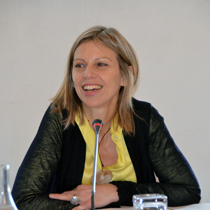 Anna Triandafyllidou is Professor at the Global Governance Programme (GGP) of the Robert Schuman Centre for Advanced Studies (RSCAS), European University Institute. Within the GGP she coordinates the Research Area on Cultural Pluralism. Before joining the Programme, she was part time professor at the RSCAS (2010-2012). During the period 2004-2012, she was Senior Fellow at the Hellenic Foundation for European and Foreign Policy (ELIAMEP) in Athens where she headed a successful migration research team. She has been Visiting Professor at the College of Europe in Bruges since 2002. She is the Editor-in-Chief of the Journal of Immigrant and Refugee Studies.

Professor Triandafyllidou received her PhD from the European University Institute in 1995 and held teaching and research positions at the University of Surrey (1994-95), the London School of Economics (1995-97), the CNR in Rome (1997-99), the EUI (1999-2004) and the Democritus University of Thrace. She was a Fulbright Scholar-in-Residence at New York University in 2001, and a Colston Fellow at the University of Bristol (2001-2002). She serves as national expert in the OECD Network of International Migration Experts (formerly SOPEMI) and acts as an evaluator of research projects for the European Research Council (Advanced, Consolidating and Starting Investigator Grants), the Research Framework Programmes of the European Commission (FP5, FP6, and FP7 and Horizon 2020), the European Science Foundation, the Norface ERA-NET network, and several national ministries, research agencies and Universities in Australia, Austria, Belgium, Canada, Croatia, Cyprus, Finland, France, Greece, Italy, the Netherlands, Sweden, Switzerland, the UK. She has also worked as an evaluator for DG Home policies and has been consulted by the European Parliament on migration research issues.

Her main areas of research and teaching are the governance of cultural diversity, migration, and nationalism from a European and international perspective. Over the past 15 years, she has raised approximately 13 million Euro in research funds from European, international and national sources, and co-ordinated 30 international research projects in these research fields. Her publications include more than 120 articles in refereed journals and chapters in collective volumes, five authored books and over 20 edited and co-edited volumes.

For a full list see www.annatriandafyllidou.com. For her current projects and research activities see  http://globalgovernanceprogramme.eui.eu/research-areas/cultural-pluralism/