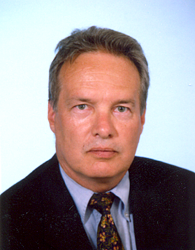 Professor at the College of Europe, Brugge, since 1988. He is currently Centennial Professor of Law at the London School of Economics and Professeur associé at the Université d'Aix-Marseille III. He holds a B.A. from Yale University, was a Fulbright Scholar at the Institut d'Etudes Politiques de Paris, received the J.D. from Harvard Law School, and holds a Doctorate de Spécialité (3ème Cycle) from the Université de Paris I (Panthéon-Sorbonne). He is a U.S. Attorney (Bar of Massachusetts). In 1988 he was awarded the title of Officier de l'Ordre des Palmes Académiques. In 2000-2001 he was a Fellow at the Wissenschaftskolleg (Institute for Advanced Study), Berlin. From 1999-2000 he was Professor of European Community Law at the European University Institute, Florence, where he also served as Head of the Law Department and Co-Director of the Academy of European Law. He was previously Professor of European Law at University College London. He has held visiting appointments at many universities in Europe, North America and Asia, including the first Robert Schuman Professorship in China (Chinese Academy of Social Sciences, 1998). He served on the Working Group based at the EUI ion Florence that prepared a 'Basic Treaty of the European Union' for the European Commission prior to the Nice IGC. He also served on a similar group during the drafting of the Amsterdam Treaty. He is the founder and Editor-in-Chief of the European Law Journal. His many publications include Law of the Common Agricultural Policy (1985, French trans. 1987, Ital. Trans. 1990); International Trade and Customs Law of the European Union (1998); and The Europeanisation of Law: The Legal Effects of European Integration (editor, 2000).