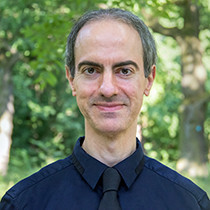 Georgios was born and raised in Komotini, Greece. He holds a Bachelor’s degree in Economic Sciences and a Master’s degree in Informatics and Management, both by the Aristotle University of Thessaloniki. As a student, he was a Vice-President of AIESEC in Aristotle University of Thessaloniki for two years and a Vice-President of AIESEC in Greece for one year.

He has been a trainee at CEDEFOP (European Centre for the Development of Vocational Training) and he has professional experience as a teacher of Management and as a researcher in Education with the use of open-source software. Before joining the College of Europe, he worked for more than 4 years as an Erasmus+ officer at the Aristotle University of Thessaloniki. His main academic interests are Knowledge Management, Administration of Education, Professional Orientation and European Integration.

He is also interested in music, dancing, photography and creative writing. He has been a conservatory student in bass guitar, music theory & harmony and he has taken part in musical and dancing performances. He has also completed a 3-year course in creative writing. Additionally, he has been a volunteer in several editions of Thessaloniki International Film Festival, Thessaloniki Documentary Festival, Action Field Kodra and other artistic events.

Georgios works at the College of Europe in Natolin since May 2018.