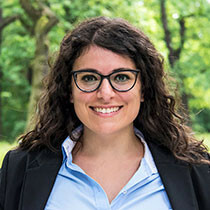 Dr Giovanna Di Mauro is an Academic Assistant at the College of Europe, Natolin campus, and a Lecturer at Collegium Civitas, Warsaw, where she teaches courses on academic writing, frozen conflicts, and peacebuilding through the arts.

She has five years of experience in project management. Before Warsaw, Giovanna worked in Paris, Chisinau and Strasbourg: as a European Project Officer for the NGO OSE France; as a Project Manager for the Italian-Moldovan Chamber of Commerce; as a Project Assistant for the Italian Ministry of Foreign Affairs and the NGO PRO.DO.C.S.; and finally as a Project Assistant for the Council of Europe, where she also worked as an intern.  While in Washington, DC, Giovanna worked as a Government Affairs volunteer for Dance/USA, a professional dance NGO.

In 2019, Giovanna received a PhD in International Relations from the University of St Andrews. Her external examiner was Dr Catherine Baker of the University of Hull. During her doctoral studies, Giovanna conducted fieldwork in Moldova, served as an Academic Tutor, and attended a dozen academic conferences. From 2015 to 2016, Giovanna was a Visiting Scholar at the Institute for European, Russian and Eurasian Studies (IERES) of the George Washington University, ranked in 2019 the best university-affiliated regional studies centre of the United States (Global Go to Think Tank index).

In 2013, Giovanna obtained an MA in Expressive Arts, Peacebuilding and Conflict Transformation from the European Graduate School; in 2010 an MA in European Interdisciplinary Studies from the College of Europe (Darwin Promotion); and in 2005 a Laurea in International Relations and Diplomacy from L’Orientale.

Giovanna has written articles and blogs for New Eastern Europe, War on the Rocks, The Transatlantic Puzzle, the LSE US Centre, and the British Sociological Association's Everyday Society. She is now writing a research monograph and a series of articles on politically engaged art in Chisinau and Tiraspol. Giovanna has also contributed to an Indus News report on popular culture and politics.