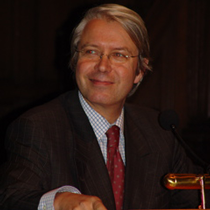 Jan De Groof is professor at the College of Europe (Bruges, Belgium) and at Tilburg University (the Netherlands) and previously at Ghent University (Belgium), teaching international and comparative educational law and policy. His academic work and numerous publications have covered many education rights-related issues but also constitutional and human rights law. His doctoral students, coming from several continents, focus on various aspects of the Right to Education.

De Groof has been visiting professor and/or taught at universities worldwide. He is founder and president of the European Association for Education Law and Policy (ELA) and co-founded the Russian and South-African Education Law Associations. He chaired – at the request of all regional Education Law and Policy Associations – the two World Conferences on Human Dignity, the Right to and Rights in Education (Amsterdam/The Hague, Brussels).
De Groof holds the UNESCO Chair for the Right to Education and is former UNESCO Chargé de Mission on the Right to Education (2007-2010). He was and remains intensively involved in consultancy for national parliaments, governments and stakeholders, not the least in time of transition (Russia: 1990-2000, South Africa: 1995-2002), often in cooperation with multilateral organisations. He is member of the ‘Council of Senior Advisors’ of the International Association of University Presidents (IAUP), accredited to the UN, and vice-chair of the Legal Committee of EQAR. Furthermore, De Groof has been Team Leader of the EU-Project ‘The Rule of Law - Curriculum Reform of Legal Studies in Universities, especially in Iraq’.

In 2015 he received an Honorary Doctorate from the University of Pretoria (South Africa), giving “recognition to his significant role as leader in various fields of education and law, his global influence in education law during the late 20th and the 21th century, as well as his assiduous campaigning for justice and good governance in education,” and also chaired the Law Sessions in the framework of the World Congress on Catholic Education (Vatican, November 2015).