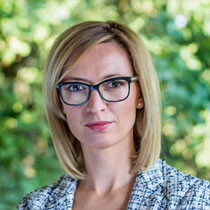 Joanna defended her PhD thesis on the role of national parliaments in strengthening democratic legitimacy of the EU in the Institute of Political Studies of the Polish Academy of Sciences in June 2018.

Prior to that she obtained a Master’s degree in political science from the Nicolaus Copernicus University (Institute of Political Science) in Toruń, Poland. She also studied in the Institute of Political Studies (Sciences Po) in Bordeaux. Joanna graduated from the College of Europe in Natolin in 2009 (Marcus Aurelius Promotion).

Her main fields of interest include governance in the EU, EU institutional system, theories of European integration as well as the questions of democracy, legitimacy and the EU.

Joanna has been working at the College of Europe in Natolin since September 2009. From September 2009 to January 2015 she was Academic Assistant (Politics), between February 2015 and March 2018 she worked as Senior Academic Assistant (Politics) and since April 2018 she is also the Coordinator of Operations in the European Interdisciplinary Studies department.