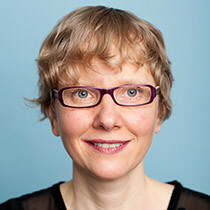 Katrin Schmidt (DE) is visiting language professor for German at the College of Europe. She studied at the University of Würzburg (Germany) where she graduated with a Master in German and Spanish Philology.

From 2005 to 2008 she was a PhD student of Applied Linguistics at the University of Barcelona. After that, she started to work as a German teacher at several language schools and universities in Catalonia (Spain). From 2017 to 2020, she worked as an online tutor for future German teachers for the University of Jena (Germany). Since 2018, she teaches German as a foreign language at the Goethe Institute in Brussels and since 2019 also at the European Commission. During her career, she has regularly acted as an official examiner (TELC, Goethe certificates, EPSO).