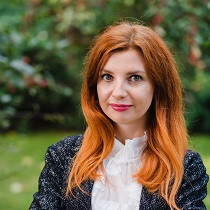 Dr Małgorzata J. Lewandowska holds a Ph.D. in Italian linguistics and has been working at the Italian Studies Department of the University of Warsaw since 2017. A graduate of the  Italian Language and Literature Department of the University of Warsaw, she has also studied at the University of Salento (Lecce, 2006/07) and the Alma Mater Studiorum University of Bologna (2014/15). She has been awarded scholarships from the Italian Cultural Institute in Warsaw (2007) and the University of Milan (CALCIF 2014). She has 14 years of experience as a head lecturer of the Italian language and is a member of the International Association of Italian Professors (AIPI). Her academic interests include Polish-Italian contrastive grammar, discourse analysis and textual genres, language in women's press, as well as the phenomenon of women's advice columns which she devoted her doctoral thesis.

She participated in the Mujeres de mi familia international project
(a collaboration between Italy, Spain and France) against violence towards women (2016), and
conducted guest lectures on images of the female body in the press at various institutions, including the Department of Educational Sciences (Dipartimento di Scienze dell’Educazione) at the University of Bologna (2016).