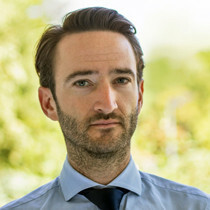 Olivier is a Lecturer in Defence Studies Education in the Department of Defence Studies at King's College London. Prior to joining King's, Olivier held a Research Fellow position and a Senior Academic Assistant position at the College of Europe, Natolin Campus. During his doctoral studies at the University of St Andrews, Olivier was an Academic Tutor for two undergraduate courses: Introduction to International Relations and Foreign Policy Analysis and International Security. He also conducted internships in Brussels (with the United States Mission to NATO, and Transparency International) and in Paris (with the Jacques Delors Institute, and the Institute of International and Strategic Relations (IRIS)). For a while, Olivier also taught scuba diving.

Olivier is currently a reviewer for Routledge & CRC Press and the Journal of Intervention and Statebuilding. His professional memberships include an Associate Fellowship at Advance HE (formerly the Higher Education Academy) and memberships with several academic associations related to International Relations (e.g. ISA, EISA).

Olivier can supervise research, in English or French, on the following topics:

In March 2018, Olivier defended his PhD thesis entitled "Explaining Military, Law Enforcement and Intelligence Cooperation between Western States". His external examiner was Professor Didier Bigo of Kings College London/Science Po Paris. From 2015 to 2016, Olivier was a Visiting Researcher at the BMW Center for German and European Studies at Georgetown University. Prior to his doctoral studies, he obtained an MSc in Social Research Methods from the University of Sussex, an MA in Interdisciplinary European Studies from the College of Europe (Darwin Promotion), an MLitt in International Political Theory from the University of St Andrews, and a BA in International Relations, French and Journalism from Lehigh University. In 2005, Olivier spent a semester studying Arabic and the politics of the Middle East at the American University in Cairo. He obtained his Baccalauréat Général from the Lycée Saint-Joseph d’Avignon, a high-school founded in 1564 by Jesuits promoting renaissance humanism.

Michels, Jeffrey and Olivier Lewis. “The 2020 election showed that libertarians have a long way to go before they can become a national movement". What Happened?, The LSE US Centre’s daily blog on American Politics and Policy, 23 December 2020.

Lewis, Olivier and Jeffrey Michels. “Justin Amash’s presidential bid shows that some Republicans’ future may be with the Libertarian Party”. Primary Primers, The LSE US Centre’s daily blog on American Politics and Policy, 1 June 2020.

Lewis, Olivier and Jeffrey Michels. “Why Justin Amash could be a game-changer without a chance”. Primary Primers, The LSE US Centre’s daily blog on American Politics and Policy, 15 May 2020.

Lewis, Olivier and Jeffrey Michels. “How Libertarians could be the kingmakers of the 2020 presidential election”. Primary Primers, The LSE US Centre’s daily blog on American Politics and Policy, 15 November 2019.