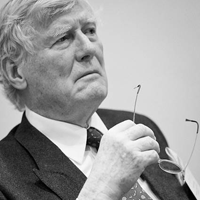 Economist (ULg, UCL, Harvard), Pierre Defraigne was a European civil servant from 1970 to 2005. He retired as Deputy Director-General in DG Trade in March 2005, after having been Head of Cabinet for Pascal Lamy, European Commissioner for Trade (1999-2002). Previously, he was Director for North-South Relations, and Head of Cabinet for Etienne Davignon, Vice-President of the European Commission (1977-1983). He has set up the Brussels branch of the French Institute for International Relations (Eur-Ifri), which he managed from 2005 to 2008. Pierre Defraigne is currently the Executive Director of the Madariaga – College of Europe Centre since 2008.

Pierre Defraigne is a visiting professor at the College of Europe in Bruges and at Sciences Po Paris (Paris School of International Affairs).

Pierre Defraigne regularly publishes on EU-China relations, eurozone governance and macroeconomic issues through the Centre’s Madariaga Papers. He also frequently publishes articles in numerous newspapers and journals and is invited to speak at conferences as well as interviewed by television and radio stations.