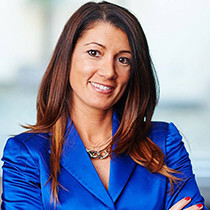 Sara has more than fifteen years of professional experience in the public relations industry. Expert in Public Affairs, she is the Chief Political Officer at the United Nations World Food Programme,  the world's largest humanitarian organization focused on hunger and food security. Previously, she was the Executive Vice President for Europe & Africa at BCW, one of the world’s largest full-service global communications agencies. Over the years Sara has led and worked on several international campaigns on behalf of companies, governments and international organisations building expertise in political communication.
She has a strong international background, having worked and studied in London, Geneva and Brussels. Sara worked at the European Commission, at the UN and WTO.
Sara holds a university degree in International and Diplomatic Studies and an M.A in European Studies at the College of Europe in Bruges.
Sara is a founding member of RENA, an Italian think tank, and a member of the Board of ThinkYoung, the first European think tank that focuses on young people with offices in Brussels, Geneva and Hong Kong.

Sara, of Italian origin, is fluent in English, French, Spanish and has an intermediate level of Portuguese.