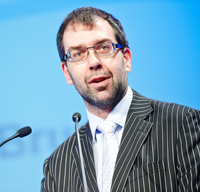 Prof. Dr. Sven BISCOP obtained his degree in political science/public administration at Ghent University (Belgium) in 1998, winning the best thesis award for his work on European defence. Subsequently awarded the Paul-Henri Spaak PhD scholarship of the Fund for Scientific Research – Flanders, he defended his dissertation in Ghent in 2002, published as Euro-Mediterranean Security: A Search for Partnership (Ashgate, 2003).

Currently Sven is the director of the Europe in the World programme at the Egmont – Royal Institute for International Relations in Brussels, the think tank associated with Belgian Foreign Affairs, which he joined in 2002. His research focuses on the foreign, security and defence policies of the European Union, NATO and their Member States.

Sven teaches at Ghent University (since 2003) and at the College of Europe in Bruges (since 2007). As a member of the Executive Academic Board of the EU’s European Security and Defence College (ESDC), he regularly lectures in its courses, as well as in various European staff colleges, and at the People’s University in Beijing, where he is a Senior Research Associate of the Centre for European Studies. Sven also represents Egmont in the Higher Studies in Security and Defence, a course for security practitioners organized with the Belgian Royal Higher Institute for Defence.

Sven chairs the jury of the biennial European Defence Agency – Egmont PhD Prize in European Defence, Security & Strategy. He serves on the Committee of the University Association for Contemporary European Studies (UACES) and is a member of the Strategic Advisors Group of the Atlantic Council (Washington) and of the board of the Flemish United Nations Association.

With Richard Whitman, Sven co-edits the European Strategy & Security book series for Routledge; and with Knud Erik Jorgensen he co-edits Global Affairs, the journal of the European International Studies Association (EISA). He is the editor-in-chief of Egmont’s journal Studia Diplomatica and its Egmont Papers, and a member of the editorial board of the journals European Security (UK) and The International Organisations Research Journal (Russia).

Sven’s recent work includes Europe, Strategy and Armed Forces – The Making of a Distinctive Power (Routledge, 2011, with Jo Coelmont) and The Routledge Handbook of European Security (Routledge, 2012, co-edited with Richard Whitman). Forthcoming works are The Ashgate Research Companion to the Foreign Policies of Europe (co-edited with Alexander Mattelaer) and Peace without Money, War without Americans – European Strategy Can Cope (Ashgate).

Born in Willebroek (Belgium) on 10 February 1976, Sven now lives in Brussels with his husband Aberu, amid a great many books, military paraphernalia, and chinoiseries. Unfortunately they travel too often to keep a cat.