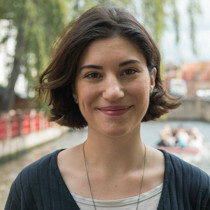 Tatiana Kakara (GR) is an Academic Assistant at the College of Europe in Bruges, Department of EU International Relations and Diplomacy Studies, since August 2019.

She also conducts expert consulting work, as external contractor, on a series of Human Rights Handbooks for the Congress of Local and Regional Authorities of the Council of Europe.

She holds an MA in EU International Relations and Diplomacy Studies from the College of Europe (Manuel Marín promotion 2018-19). In January 2017, she graduated from the Law Faculty of the University of Heidelberg with a Magister Juris (MJur, First State Examination) in German Law, majoring in Public International Law.

Previously, Tatiana worked as freelance Research Assistant at the European Centre for International Political Economy (ECIPE) in Brussels, as a bluebook trainee in the Cabinet of the European Commissioner for Migration, Home Affairs and Citizenship (2017-18) and as a trainee in the Monitoring Committee of the Congress of Local and Regional Authorities of the Council of Europe in Strasbourg (2017). During her Law studies, Tatiana held positions in the project development department of EnBW-Energie Baden-Württemberg (2016) and in the International Relations Office of the University of Heidelberg (2012-15), and she interned at the Consulate of Greece in Düsseldorf (2014), as well as in private law firms in Berlin and Athens (2013, 2012).