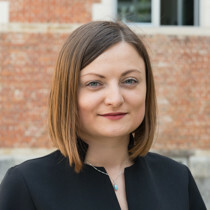 Yana BROVDIY (UA) is Senior Academic Assistant at the College of Europe, Master of Arts in Transatlantic Affairs (MATA), since August 2018 and in the European General Studies Programme since August 2019.

Yana holds a Master of Arts in European Political and Governance Studies from the College of Europe (2017-18, Simone Veil promotion) and a Master of Science in European Affairs from Lund University (Sweden, 2010-12). She completed her Bachelor in International Relations at the Metropolitan University Prague (Czech Republic, 2007-10).

She previously worked as Junior Project Coordinator at the Deutsche Gesellschaft für Internationale Zusammenarbeit (GIZ) in Ukraine (2016-17) and as Research and Communication Officer at the Ukrainian Think Tanks Liaison Office in Brussels (2014-16). Her professional background also includes a traineeship at the European Committee of the Regions, Commission for Citizenship, Governance, Institutional and External Affairs (Brussels, 2016).

Yana is an alumna of the Future Leaders Exchange Program (2006-07), a merit-based scholarship program funded by the U.S. Department of State.

1. “Strengthening the European Union’s Role as a Global Health Actor”, Institute of European Democrats, December 2020.
2. "Disinformation in Times of COVID-19: Reinforcing the Responses of the European Union and the United States", College of Europe Policy Brief Series, June 2020.