Conference of Gender Equality: "Partners in time: The role of men and women in promoting equal opportunities today"

On Friday, 6 March 2020, the Department of European Political and Governance Studies hosted the first Conference on Gender Equality titled “Partners in Time: The role of men and women in promoting equal opportunities today”. The conference explored the topic of gender equality to assess the part men can play, in synergy with women, to achieve equal rights. Too often, gender equality is perceived as a female issue in our society, and the role of men tends to be highly disregarded. However, men and women are in fact partners and they should both actively contribute to the creation of a society where they share equal opportunities. What have men done and are they doing to enhance gender equality? Which role can they play today?

With the new European Commission and Parliament at the beginning of their mandate, it is now more important than ever that the EU sets its priorities straight, including a vision on gender that is inclusive and understands the key role every member in our society can play to the achievement of equal rights.

To reflect upon these topics, the conference gathered a range of experts in the field, coming both from the institutions and from academia. The conference started with a keynote address by Dr Joyce MUSHABEN (University of Missouri – St. Louis) on "Real Men, Strong Women, and the European Equality Agenda: A US-Feminist Perspective on Ursula von der Leyen and Gender Mainstreaming." After that, a panel debate counted on the interventions of former MEP Jackie JONES; Neil DATTA, Secretary of the European Parliamentary Forum for Sexual and Reproductive Rights; and Dr MUSHABEN.

This conference was set to begin a series of events at the College of Europe aimed at the discussion of gender equality and the challenges faced at EU level.

This event was organised in collaboration with the SAGE group of the College of Europe. 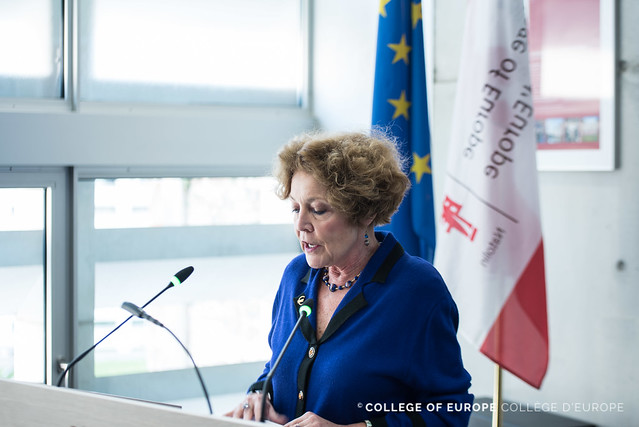