Ambassador KAYMAKCI is since February 2017 the Permanent Delegate of Turkey to the EU. From October 2013 to January 2017 he was the Ambassador of Turkey in Iraq, and he served as the Turkish Consul General in Basrah (2011-13). Prior to that he was the Chief Foreign Policy Advisor to Turkey’s EU Minister and Chief Negotiator as well as Director for EU Communication at the EU Ministry (2008-11). He worked at the Turkish Ministry of Foreign Affairs in Ankara at the Directorate-General (DG) for International Economic Organizations, DG Balkan States (1994-96), DG Policy Planning (2002-03) and DG European Union (2008). Moreover, he served at the Turkish Embassy in Tripoli (1997-99), at the NATO Senior Civilian Representative’s Office in Kabul (2004-05) and twice at the Turkish Permanent Delegation to the EU in Brussels (1999-02 and 2005-08).

Ambassador KAYMAKCI graduated from the Economics Department of the Faculty of Political Science of Ankara University and obtained Master’s degrees from the London School of Economics and from the College of Europe in Bruges. He is a holder of the NATO Medal for his service in Afghanistan and was selected as one of the three ‘Alumni of the Year 2007’ of the College of Europe. 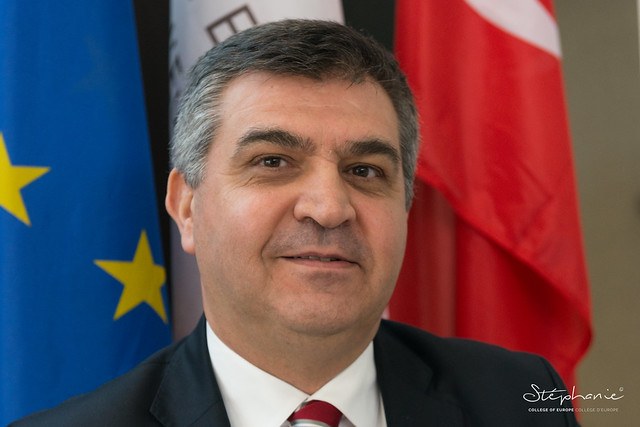 This lecture was a closed event organised by the Department of EU International Relations and Diplomacy Studies.