On 1-3 February 2018, the Natolin campus hosted an international conference on "Rousseau, Poland and Europe: Federalism – Sovereignty – Prosperity – Patriotism" organized by the European Civilization Chair as part of its mission to stimulate fresh thinking on Europe’s future through the broadly-conceived study of Europe’s past. This was the second event in the cycle on "The Fate of Freedom", one of the Chair’s three principal research themes, initiated by the 2016 conference on "The Fate of Freedom in Eastern Europe: Autocracy – Oligarchy – Anarchy?".

Jean-Jacques ROUSSEAU (1712-1778) remains one of the most significant and most controversial of all political philosophers, who threw down fundamental challenges to the assumptions of Europe's intellectual elites concerning progress, modernity and freedom. The crucial problems ROUSSEAU tackled in one of his most important yet underappreciated works, his Considérations sur le gouvernement de Pologne (1771), include the conference themes of federalism, sovereignty, prosperity and patriotism, all interlinked by the idea of liberty. 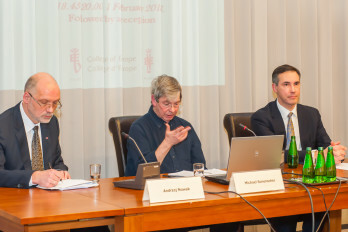 The first evening of conference—opened with a welcome from the Vice-Rector, Mrs Ewa OŚNIECKA-TAMECKA, and an introduction by the Chairholder, Professor Richard BUTTERWICK-PAWLIKOWSKI—brought a lively debate on "Why is Rousseau’s advice to Poles still relevant to Europe today?" The principal lesson, according to Professor Andrzej NOWAK, a visiting professor at the College of Europe, is that the citizen and the community should take priority over the individual consumer. In reply, Dr Michael SONENSCHER, of King’s College, Cambridge, argued that Rousseau’s important prescriptions for the community are intertwined with his reflections on the individual self, which is what makes his thought particularly interesting.

Thirteen papers were delivered and discussed over the following two days, informed by the pioneering work of Professor Jerzy MICHALSKI, now made available in English thanks to Professor BUTTERWICK-PAWLIKOWSKI’s translation. Six papers concentrated on Rousseau's text (Professor Anna GRZEŚKOWIAK-KRWAWICZ and Professor Dominique TRIAIRE), his dialogue with the Polish republican Michał WIELHORSKI (Dr Graham CLURE and Mr Radosław SZYMAŃSKI), and his thoughts on federal government (Dr Michael SONENSCHER) and on the relevance of Rousseau’s Considérations, for the idea of republican patriotism today (Professor Gregory S. BROWN). Seven considered Rousseau’s work in the wider contexts of late eighteenth- and early nineteenth-century discussions about Poland among Enlightened and Romantic European thinkers (Professor François ROSSET, Dr Julie FERRAND, Dr Thérence CARVALHO, Professor Béla KAPOSSY, Professor Alexander SCHMIDT, Dr Iain MCDANIEL and Dr Anna PLASSART). Poland, beset by crises and falling under Russian domination, yet, as Rousseau put it, burning with ‘all the fire of her youth’ for freedom, held important lessons on federalism and sovereignty, patriotism and prosperity.

The conference programme is available here. 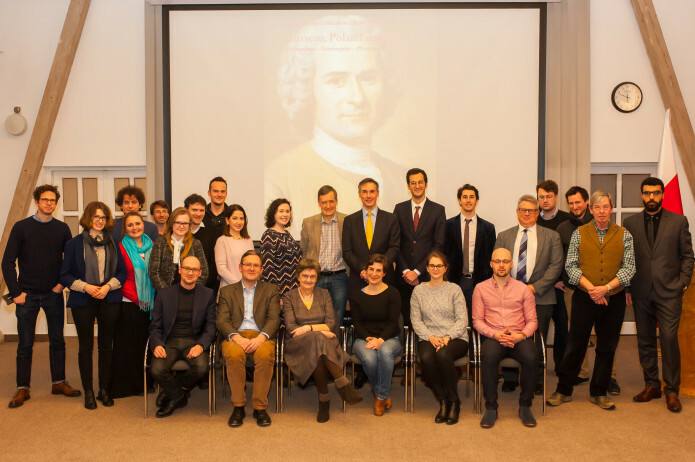