On Tuesday, 22 June 2021, the College of Europe in Natolin organized the Graduation Ceremony of the Academic Year of the Mário Soares Promotion 2020/2021.

As per long-standing tradition, our Natolin Choir opened the ceremony by singing the Ode to Joy followed by the welcome speech of the Vice-Rector Mrs Ewa OŚNIECKA-TAMECKA. The ceremony was attended by Rector Mrs Federica MOGHERINI, who delivered the graduation address.

Later, Vice-Rector Mrs Ewa OŚNIECKA-TAMECKA and the Student Representatives (from the Natolin and Bruges campuses) gave their farewell speeches. The ceremony ended with a musical performance by the pianist Mr Jakub LUBOWICZ and the Natolin Choir. All guests could also benefit from a surprise performance by our students Mr Younes BENIMAM and Mr Oscar NAVARRO GERARDO.

Afterwards, a family picture was taken in front of the Natolin Palace, and a common lunch took place in the Library Garden.

On the occasion of the ceremony, the following prizes were announced and awarded by Prof. Pascaline WINAND, Prof. Georges MINK and Prof. Tobias SCHUMACHER to the best students of the Mário Soares Promotion 2020/2021:

To conclude the Graduation Day beautifully, we took a cup of kindness together and shared the table.

The Farewell Dinner took place at 21:00 at the Natolin Palace. The first course of the dinner prepared by our Restaurant was accompanied by a Jazz Quintet, the PROM Jazz Band! This band, consisting of graduates of the Fryderyk Chopin University of Music, instrumentalists, band leaders and arrangers, performed pieces from the Golden Age of Jazz to contemporary popular music hits.

Around 22:00, just before the desserts, came the main performance of the night – a concert by the musicians Mr TRACZYK, Mr LUBOWICZ, Mr BOROWIECKI and Mr DOBOSZ. The lead singer, Mr Janek TRACZYK, is the first voice at the Roma Musical Theatre in Warsaw. A laureate of many competitions and known for several television programmes, at the Musical Theatre Roma he recently performed in "Waitress", "Aida", and "Piloci".

Mr Jakub LUBOWICZ is a composer, arranger and music director. He collaborates with many Polish theatres, and he has performed on several dozens of albums by other famous artists. The repertoire of the musicians included songs from well-known artists such as Frank Sinatra, Michael Bublé and Robbie Williams!

It was an unforgettable night made of great music, delicious food, and friendship!

For the final performance of the night the participants had the pleasure to hear the incredible voice of the Soprano Mrs Bogumiła DZIEL-WAWROWSKA, who has collaborated with almost all symphonic orchestras in Poland, performed at several international festivals and portrayed the main roles in several important productions, including the "Barbiere di Siviglia" of Rossini and the "Haunted Manor" of Stanisław Moniuszko.

Around 23:00 came the time to say goodbye as it was the last event of this academic year. Some students shed tears as they realised that their intense and emotional journey at Natolin was coming to an end. However, our new alumni should not worry, as the saying goes: Natolinian pour un jour, Natolinian pour toujours ! 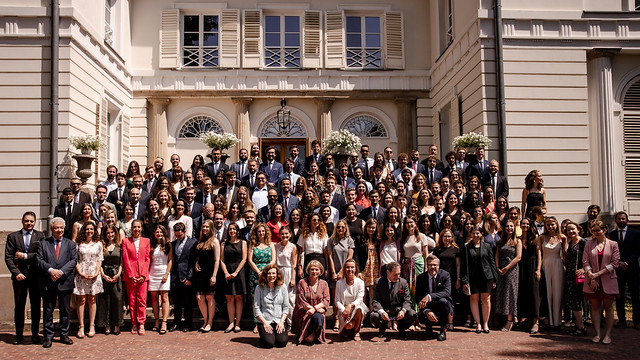 The event was organized following all COVID-19 regulations and sanitary measures enacted by the local laws, as well as the recommendations of the World Health Organization.