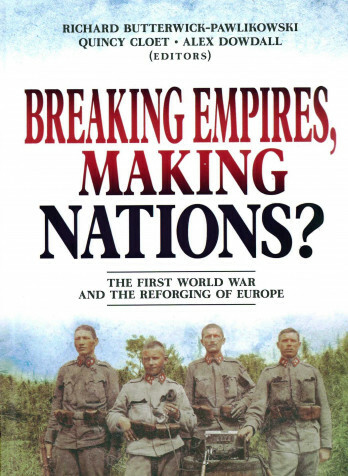 Breaking Empires, Making Nations? The First World War and the Reforging of Europe has been published by the College of Europe Natolin campus and the Natolin European Centre.

It addresses five principal themes. The first is the titular question of "breaking empires, making nations?". While some empires were indeed broken, others were reforged by the war and its aftermath. While national forces changed empires, imperial forces altered nations. The second is the hitherto unprecedented scope, scale and intensity of the war, which, whatever its origins, soon became a war of peoples, fought for great causes. The third is the resilience of states and societies in the face of this intense pressure. The fourth is extension – the conflict extended well beyond the Western Front and in many places lasted longer than the Armistice of 11 November 1918. Commemoration and memory also varied considerably between countries and over time, and so did reflection on the meaning of the conflict for the idea of Europe – the fifth and final theme.

The book contains ten chapters by leading historians, as well as an extended introduction by the editors, all of whom are associated with the European Civilization Chair at Natolin – the current Chairholder, Professor Richard BUTTERWICK-PAWLIKOWSKI; former Research Assistant, Mr Quincy CLOET; and former Postdoctoral Research Fellow, Dr Alex DOWDALL. Most of the chapters are revised versions of papers given at the international conference Breaking Empires, Making Nations? The First World War and the Reforging of Europe held at the College of Europe in Natolin by the Chair on 7 and 8 April 2015.