In the framework of the event, a panel discussion "At a crossroads? EU-U.S. relations 30 years after the fall of the Berlin Wall" with high-level speakers took place, followed by a networking reception attended by alumni of both institutions as well as first- and second-year students of the MATA programme.

The participants were welcomed by Michaela ŠIMÁKOVÁ, President of the College of Europe Alumni Association, Simon SCHUNZ, Academic Coordinator of Transatlantic Affairs Programme at the College of Europe, Rachel KYTE, Dean of The Fletcher School at Tufts University (via a recorded video message) and Rachel TAUSENDFREUND, Editorial Director at the GMF Berlin office, who presented the publication "Reassessing 1989: Lessons for the Future of Democracy".

Ian LESSER, Vice President at The German Marshall Fund of the United States (GMF), moderated the panel. Benedetta BERTI, Head of Policy Planning in the Office of the Secretary General at NATO, David O’SULLIVAN, former Ambassador of the European Union to the United States (2014-2019) and Mark W. LIBBY, Deputy Chief of the U.S. Mission to the European Union in Brussels, took part in the panel discussion. The discussion took place under the Chatham House Rule.

Candidates who are interested in the Master of Arts in Transatlantic Affairs can still apply for starting the programme at the beginning of the academic year 2020/2021. The application deadline is 15 January 2020.

Photo's of the event: 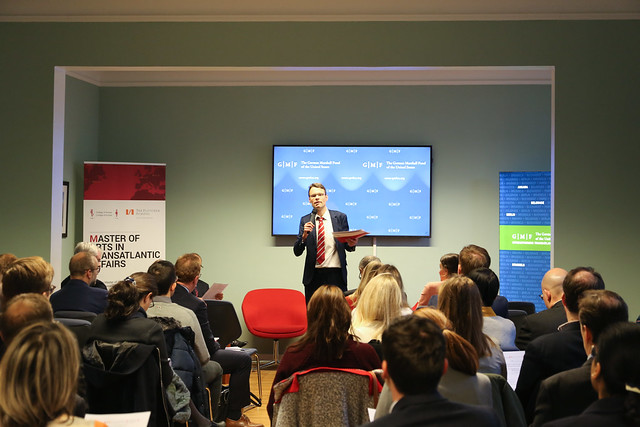