The guest of the second The College of Europe Talks was Ms Fawzia KOOFI, Afghan politician and women's rights activist.

This event was live-streamed.

On Thursday 12th November, students from both campuses attended the second College of Europe Talk with Fawzia KOOFI, Member of the Afghan Parliament, Chairperson of the Women, Civil Society and Human Rights Commission, first female Afghan Presidential candidate, and member of the Afghan negotiating delegation in the peace process with the Taliban. It was a great honour to listen to Ms KOOFI’s experiences in the historic peace process in Afghanistan and the role that women are playing therein.

Ms KOOFI outlined the context behind the peace negotiations, reminding the audience that her country has suffered from this conflict for more than four decades. After 20 years of US and NATO presence in Afghanistan, she explained that there is now a political consensus inside and outside the country to ensure long-lasting peace. Two years ago, the US started direct talks with the Taliban, which resulted in an agreement on the 29th February 2020, which was recognized by the Islamic Republic of Afghanistan. This was then followed by the establishment of a negotiating delegation: a 21-member team, composed of four women, that is representative of religious and ethnic minorities. Ms KOOFI explained that for the first time, women’s and human rights are going to be a formal part of the negotiations of an international peace process.

For Ms KOOFI, the outcome of these negotiations is very important for Afghanistan’s young and dynamic society, which is determined to build a more stable future. She reminded the audience that people are still losing their lives every day, citing the attack in Kabul University on 2nd November 2020 as an example.

Asked about the expectations of Afghan citizens on the role of women in this peace process, she emphasized the change in today’s society, which is less conservative. There is a growing consensus to grant girls access to education, as well as to allow women’s participation in politics and social life. Ms KOOFI also explained that Afghan women have started to form alliances to ensure that their interests are part of the peace process. Rector MOGHERINI agreed that what makes these negotiations so unique is the fact that human and women’s rights are not afterthoughts, but key considerations. 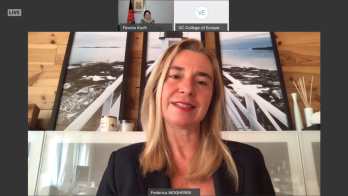 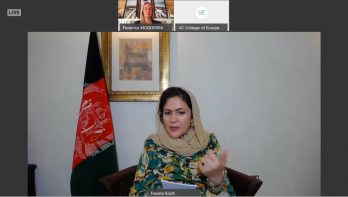 Throughout the conversation, Ms KOOFI repeatedly referred to the crucial role and support of the international community, including the United Nations and the European Union, for a successful outcome of the process. She highlighted the importance of genuinely involving neighbouring countries in the peace process, in order to contribute to a positive outcome in the economic interests of the entire region. On this point, the Rector confirmed that the European Union could be a key player to ensure that every neighbour feels equally engaged. Especially with regard to its values, i.e. supporting democracy and protecting human rights, the role of the EU seems critical to Ms KOOFI. Moreover, she underlined the importance of having a guarantor to ensure that both sides are respecting and enforcing the outcome of the peace process.

Negotiations started in September, and Ms KOOFI explained that at this early stage the parties are determining a code of conduct. But, in her opinion, the first important achievement is the fact that both parties have agreed to meet and discuss these matters. One thing that she is proud of is the fact that women are sitting across the negotiation table from men – they want to be considered as equal citizens and politicians representing their country, without being just regarded as women.

Asked about her personal impression when first meeting the Taliban, Ms KOOFI described mixed feelings of anger and power: “Only twenty years back, women were the citizens that were not regarded as someone that needs to be respected”. Thus, Ms KOOFI admitted that, despite her excitement, the female negotiators have a special responsibility. Women in Afghanistan have high expectations and want to see quick progress, as their opportunities are taken away from them while violence is increasing every day.

Rector MOGHERINI emphasized the important role that Ms KOOFI has been playing for women in Afghanistan and the entire region. She acknowledged what an inspiring woman Ms KOOFI is, reminding us that Ms KOOFI still continues her mission, despite having been attacked only a few months ago. 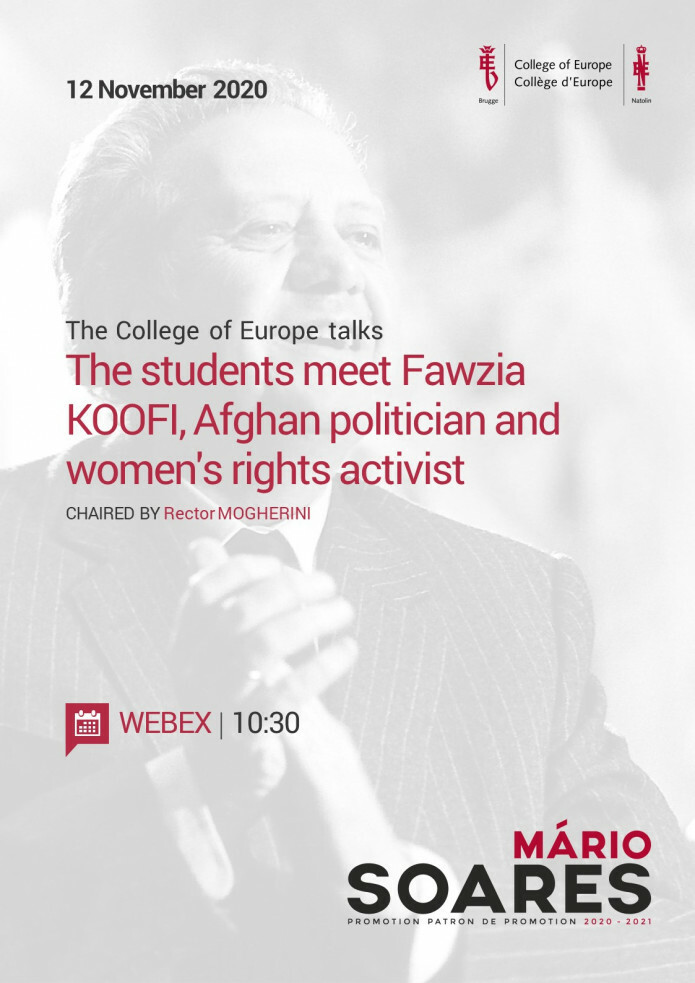