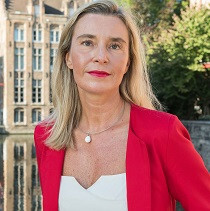 Previously, she has served as the High Representative of the European Union for Foreign Affairs and Security Policy and Vice-President of the European Commission (2014-19).

She has co-chaired the United Nations High-Level Panel on Internal Displacement from January 2020 to September 2021.