On 28 September 2017, the College of Europe and the Fletcher School of Law and Diplomacy, Tufts University (Medford, MA), inaugurated their new joint Master of Arts in Transatlantic Affairs (MATA) programme with a special event in Bruges.

In their introductory speeches, the Rector of the College of Europe, Jörg MONAR, and the Dean of The Fletcher School, James STAVRIDIS, welcomed the first cohort of students into the programme. Both speakers recalled the origins of this joint Master, and argued for the importance of studying transatlantic affairs at this point in time and in the midst of a complex global environment. Simon SCHUNZ, Academic Coordinator for the MATA programme at the College of Europe, then outlined the major components of this new programme, and how it intends to deliver on its key objective of forming a new generation of young transatlantic leaders.

The ensuing round table on "Transatlantic Relations in Challenging Times" led to a vivid discussion about the state of affairs and future prospects of EU-US relations.

Taking a historical perspective on transatlantic relations, John SHATTUCK (Professor at The Fletcher School) argued that in spite of deep and long-standing tensions between the US and the EU and its members, a set of shared values guaranteed cooperation during the post-World War II period. It allowed the transatlantic alliance to heavily contribute to the stability of the global order. The current ‘crisis’ in transatlantic relations could represent a permanent disruption of this pattern or lead to a strengthening of transatlantic ties.

Stefan FRÖHLICH (Visiting Professor at the College of Europe) focused his talk on the present state of affairs before taking a look into the future of the transatlantic relationship. In his view, the current strains in EU-US relations since the ascent to power of President TRUMP have had a uniting effect in Europe, but have also led to a sharp decline in the number of Europeans with a favourable view of the US. For the future, this may point toward an altered relationship, but a relationship to which "there is no alternative", since Europe needs the US for a variety of economic and security-related reasons. To shape this relationship, FRÖHLICH argued for European unity vis-à-vis the US and a dual-track engagement: cooperation where possible, but a firm approach on the EU’s principles.

Speaking from the policy-maker’s perspective, Ambassador Edita HRDÁ (Managing Director for the Americas at the European External Action Service) recalled the multiple continuing activities that the EU, and the EEAS in particular, are undertaking with the US, given that on many global issues partnership with the US remains crucial to make progress. She reminded the audience that the US is not only Washington, DC, and outlined possible engagement strategies on issues such as intelligence-sharing, current conflicts in Ukraine and Syria, and the nuclear threat.

Moderating and concluding the discussion, Emiliano ALESSANDRI (Visiting Professor at the College of Europe) summarized the key insights of the debate by highlighting that despite the current challenges it was difficult to unravel decades of close cooperation. While the current period might represent a moment for redefining the relationship, a new generation of transatlantic leaders may be in a position to seize the opportunities that arise. 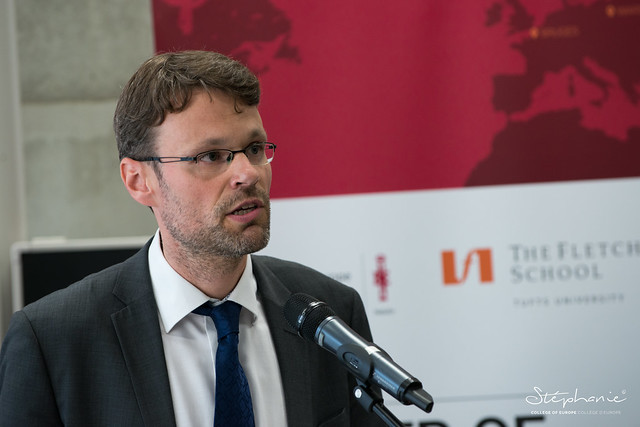 Participation was free of charge, but registration was required. The working language was English.

On the day following this launch event, 29 September 2017, an international conference on EU-China-US relations involving faculty from both the College of Europe and the Fletcher School of Law and Diplomacy was organized on the Verversdijk campus of the College in Bruges.