From 29 June to 10 July 2015, the Natolin (Warsaw) campus of the College of Europe hosted the third edition of the annual Warsaw Euro-Atlantic Summer Academy (WEASA).

WEASA is co-organized by the College of Europe Natolin campus, the German Marshall Fund of the United States and the Polish-American Freedom Foundation. The Academy aims at promoting the political, social and economic foundations of modern democracies in the European Union and the transatlantic community, as well as the values of democracy, freedom, pluralism and peace. The College of Europe Natolin campus hosts the event and oversees its academic programme. Academy participants include up-and-coming policy analysts, experts, advisers, civil servants, NGO representatives, and journalists from Eastern Partnership countries. They are chosen based on a strict selection of applications received; this year, 43 persons attended, selected from among 200 applicants. 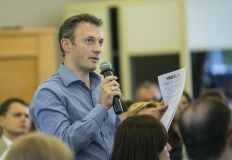 WEASA 2015 was devoted to the current and pressing topic of energy security. The programme was designed to include lectures with discussions; skills-building workshops, field visits to relevant institutions, and activities where participants themselves played the leading role. Lectures included all relevant aspects of energy security at the global, regional and local levels. Topics covered geopolitics and actors of changing energy landscapes; EU external energy governance and US energy policy; EU Energy Union; the Energy Community; transatlantic, regional and local energy security; climate change and renewable energy sources; energy markets developments, diversification of energy sources, and tools for energy sector analysis. 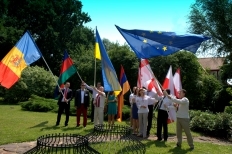 Participants visited the Centre for Eastern Studies (OSW) and the EC Representation in Poland where they held discussions on the respective aspects of energy security research and policies. Last but not least, two parts of the programme were set aside for the participants to be the principal actors. A fantastic simulation of the EU-Eastern Partnership Energy Ministerial was moderated by Ms Marta BABICZ (Polish Ministry of Foreign Affairs) and Mr Szymon POLAK (Poland’s Permanent Representation to the European Union). Each of the WEASA participants played a randomly attributed role of a country (EU or EaP) or European institution, and could experience what these meetings are about, how they are conducted, and what protocol they follow. The second event was the Roundtable on prospects for future cooperation on energy security between the EaP and the EU, and among the EaP countries themselves. The statements by each of the EaP countries were focused, well thought out and well presented, and they touched on the core issues under consideration both within EaP and in the European Union.

Congratulations to all the participants for their knowledge, enthusiasm and commitment, and our heartfelt thanks to everyone for your involvement in this highly successful Academy! We already look forward to next year’s WEASA edition.