The Polish-Ukrainian national week started on Monday, 29 January 2018 with a "Chopin evening". Students had the opportunity to listen to the famous Chopin’s nocturnes and sonata played by their talented colleagues, to eat some Polish sweets and taste one of the finest vodkas in the world "Chopin vodka". As an official opening of the week, the College's Bruges campus choir sang the national anthems of both countries.

On Tuesday, a national lunch was served with traditional dishes, like Polish "golabki", Ukrainian borsch and Ukrainian "syrnyky". In the afternoon a panel discussion took place, focusing on the civil society in post-Euromaidan Ukraine, with high-level speakers from the EU institutions and Ghent University, supported by the Mission of Ukraine to the EU. The discussion was followed by a reception and an art exhibition by Svitlana LEBIGA, Director of Culture Center of Ukraine in Belgium.

On Thursday, La Merveille, the College’s student bar, served an "Apple Pie" cocktail made of "Zubrowka", the renowned Polish vodka with apple juice.

On Friday, the Polish students organised a conference on "The Polish perspective on the Energy Union" with the participation of Adrian KONDASZEWSKI, First Secretary of the Polish Representation to the EU in charge of energy policy.

One of the highlights of the week for all the students was a Polish-Ukrainian wedding, organized by both the Polish and the Ukrainian teams of the College and supported by ‘Gaz System’ and ‘Wardyński Law Firm’. The aim of the event was to showcase common traditions in a fun and unofficial atmosphere. For the first time, at least in the history of the College of Europe Bruges campus, a fake marriage was initiated based on the Article 2 of the Treaty on the European Union. "It is definitely the event to remember for the Simone Veil Promotion and not only," said one of the students.

The week was officially closed on Sunday, 4 February 2018 with a "Pysanka workshop" by Lesya NYKOLYN, a Ukrainian student of the College. 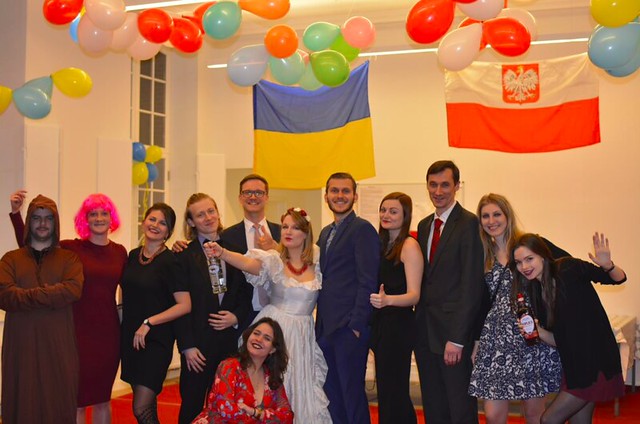