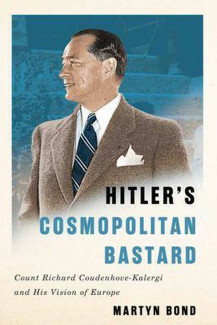 In the turbulent period following the First World War the young Count Richard Coudenhove-Kalergi founded the Pan-European Union, offering a vision of peaceful, democratic unity for Europe, with no borders, a common currency, and a single passport. His political congresses in Vienna, Berlin, and Basel attracted thousands from the intelligentsia and the cultural elite, including Albert Einstein, Thomas Mann, and Sigmund Freud, who wanted a United States of Europe brought together by consent. The Count's commitment to this cooperative ideal infuriated Adolf Hitler, who referred to him as a cosmopolitan bastard in Mein Kampf. Communists and nationalists, xenophobes and populists alike hated the Count and his political mission. When the Nazis annexed Austria, the Count and his wife, the famous actress Ida Roland, narrowly escaped the Gestapo. He fled to the United States, where he helped shape American policy for postwar Europe. Coudenhove-Kalergi's profile was such that he served as the basis for the fictional resistance hero Victor Laszlo in the film Casablanca. A brilliant networker, the Count guided many European leaders, notably advising Winston Churchill before his 1946 Zurich speech on Europe. A friend to both Chancellor Konrad Adenauer and President Charles de Gaulle, Coudenhove-Kalergi was personally invited to the High Mass in Rheims Cathedral in 1961 to celebrate Franco-German reconciliation. A provocative visionary for Europe, Coudenhove-Kalergi thought and acted in terms of continents, not countries. For the Count, the United States of Europe was the answer to the challenges of communist Russia and capitalist America. Indeed, he launched his Pan-European Union thirty years before Jean Monnet set up the European Coal and Steel Community, the precursor to the European Union. Timely and captivating, Martyn Bond's biography offers an opportunity to explore a remarkable life and revisit the impetus and origins of a unified Europe.