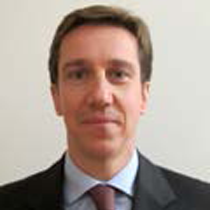 Alexandros Papaioannou studied International Relations at the London School of Economics and holds a Master's Degree in European Politics and Administration from the College of Europe, Bruges, Belgium.

He joined the Greek Foreign Service and has served in the Embassies in Rome, Moscow, the Holy See, Tunis, as well as the Permanent Representation to the European Union. He has also worked at the Cabinets of Foreign Minister George A. Papandreou and Deputy Minister for International Economic Affairs and Development Aid, Miltiadis Varvitsiotis.

He has worked for several years as a Policy Advisor at the Policy Planning Unit in the Office of the NATO Secretary General and subsequently at the NATO International Staff, Political Affairs and Security Policy Division, primarily dealing with relations with the EU.

Until January 2020, he was the Diplomatic Advisor to the Greek Alternate Minister for Citizen Protection, dealing with migration, George Koumoutsakos. After having served as the Deputy Director of the Turkey Directorate at the Greek Ministry of Foreign Affairs, he is now the spokesperson of the Greek MFA since October 2020.