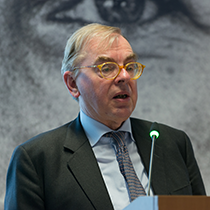 Honorary Professor at the College of Europe since 2018.

Visiting Professor in the Department of European Economic Studies from 1994 to 2017. He is also founding member and past president of the “Global Competition Law Centre” of the College of Europe and was a member of its Executive Committee until 2014.

He is a member of the Brussels bar since 1979 and was a partner at Linklaters LLP until 2010. He is currently Of Counsel in the Brussels Office of Linklaters.  As a practitioner he specialises in EU Law, free movement, competition law and State aid.  On that basis, he advises and assists clients on various aspects of EU and national competition law, including merger control. He regularly pleads cases before the Union courts.  He has represented the Belgian State in numerous preliminary ruling and infringement proceedings regarding i.a. taxation, free movement of workers and freedom of capital movement.

He is also past president and was until 2017 member of the editorial board of “Tijdschrift voor Belgische Mededinging/Revue de Concurrence Belge”.

Bernard van de Walle is the author of various publications of European Law and Competition Law and regularly speaks at conferences and seminars.