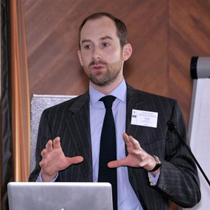 Damien Gerard is currently a Visiting Lecturer and a Research Fellow affiliated with the Charles de Visscher Center for European and International Law of the University of Louvain (UCL, Belgium). He is a member of the New York Bar and fully qualified in Brussels where he practices as a consultant for Cleary Gottlieb Steen & Hamilton LLP. In 2003-2004, Damien Gerard clerked for Judge Lenaerts of the European Court of Justice. In 2008-2009, he was a Visiting Lecturer in EC Competition Law at University Paris V - Descartes. In 2009-2010, he visited Harvard Law School as a Fulbright-Schuman Visiting Research Scholar at the Institute for Global Law & Policy, as well as the Max Planck Institute for Comparative and International Private Law in Hamburg, Germany, on a Max Planck grant.

He is a graduate of the University of Louvain, the College of Europe and New York University

Representative publications include the chapter on Judicial Review of Cartel Decisions in the leading treatise on Cartel Law in the European Union (M. Siragusa and C. Rizza, eds), one of the first comprehensive article published on EU State aids rules applied to the financial crisis (Concurrences, 2009) and an account of possible remedies to protectionist threats to cross-border mergers in the EU (Common Market Law Review, 2008).

Damien Gerard is also a member of the editorial board of the Belgian competition law journal ("Tijdschrift voor Belgische Mededingingsrecht/Revue de droit de la concurrence belge"), a regular contributor to KluwerCompetitionLaw Blog and an occasional peer reviewer for publishing houses.