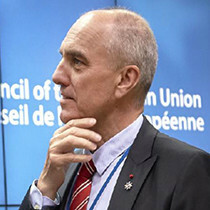 He has been Fulbright scholar at DUKE University, North Carolina, USA (1989/90), Dekaban-Liddle Foundation scholar in 1992 Glasgow University, and ACE Programme Scholar at Center for European Policy Studies (CEPS) in 1994. He worked with Breugel being between 2008-2011 Member of Board. Practitioner Fellow at the Sussex European Institute, University of Sussex, UK.

From 2008 until 2020 Director General in the General Secretariat of the EU Council of Ministers.