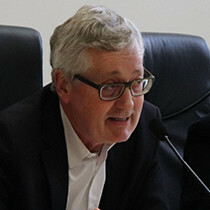 Wilhelm Lehmann studied psychology and social sciences at the University of Munich (LMU), continuing with doctoral studies in political science, psychology and economics at Stanford University and LMU, where he obtained his doctorate. He also trained as a diplomat and passed the State examination of the German foreign service. During his 25-year career in the European Parliament, he served as Acting Head of Unit of Policy Department Citizens’ Rights and Constitutional Affairs, Head of the EP’s Historical Archives and Adviser in the European Parliamentary Research Service. After being appointed EU Fellow at the Robert Schuman Centre (RSCAS) of the European University Institute (EUI) in 2010/11, he came back to the EUI as EP Fellow in 2016 and continues his research as a Visiting Fellow since 2017. Wilhelm is a member of the Centre d'excellence Jean Monnet of the University Grenoble-Alpes (UGA) and teaches in France and Austria (UGA, École Nationale d'Administration, and University of Innsbruck). In addition to authoring numerous European Parliament studies, he has published peer-reviewed articles in the Journal of European Public Policy and the Journal of European Integration, among others.