On Friday 12 and Saturday 13 February 2021, the Georgian and Armenian students of the Mário Soares Promotion of the College of Europe in Natolin had the pleasure to organize a shared cultural day, titled "Caucasian Day", to celebrate the diversity and unity of their cultures. The programme of the day included a Georgian lunch with special dishes such as "khachapuri", one of Georgian cuisine's iconic dishes, which is also part of UNESCO's Intangible Cultural Heritage of Georgia. Additionally, the Georgian students had planned various surprise entertainment activities to make the day memorable for their fellow students. Our Natolinians had the opportunity to listen to three Georgian songs - performed by our Georgian students - and watch a cheerful Georgian traditional dance called "rachuli". A Kahoot! quiz game was also organised and the best players of the quiz won a fine Georgian wine that was provided by the Georgian Embassy to Poland.

The program continued with an Armenian dinner. At dinnertime, students dressed in traditional costumes, performed two traditional dances for the Armenian Ambassador to Poland, H.E. Mr Samvel MKRTCHYAN and his Counsellor, Mr Vahagn AFYAN, as well as for the students. The Natolin Restaurant did an incredible job in setting up a true Armenian atmosphere with the classics of the Armenian cuisine, such as the well-known Armenian bread "lavash", also part of UNESCO's Intangible Cultural Heritage, as well as Armenian wine and cognac. In the evening, the Ambassador of Armenia to Poland delivered a speech on "EU-Armenian relations", followed by an active Q&A session. Shortly after, an Armenian dancer of the Warsaw Sunday School performed an Armenian national dance for the student community. Students also had an opportunity to test their knowledge of Armenia with a Super Quiz and the winners were awarded with Armenian cognac and wine.

The evening ended on a romantic note: students received "axiblit", a salted pancake, according to the Armenian version of Saint Valentine ("Surb Sarkis"). Finally, a workshop: the Armenian Kochari gathered students eager to learn this typical Armenian traditional folk dance.

On Saturday, the Ambassador of Georgia to Poland, H.E. Mr Ilia DARCHIASHVILI visited the campus and delivered a speech on "Georgia's European integration". The High-Level Talk was followed by a Q&A session. A performance of the Natolin Choir made the evening even more interesting! 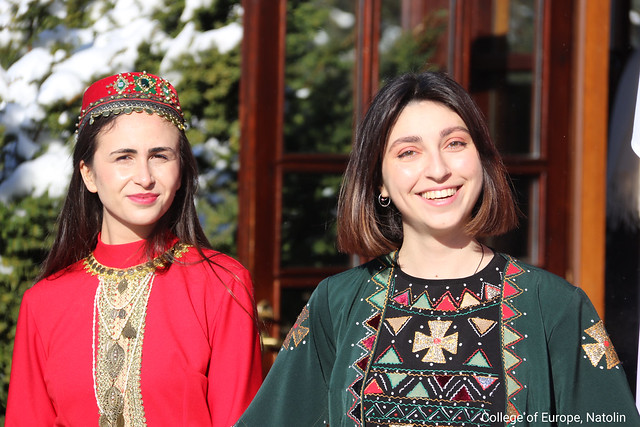