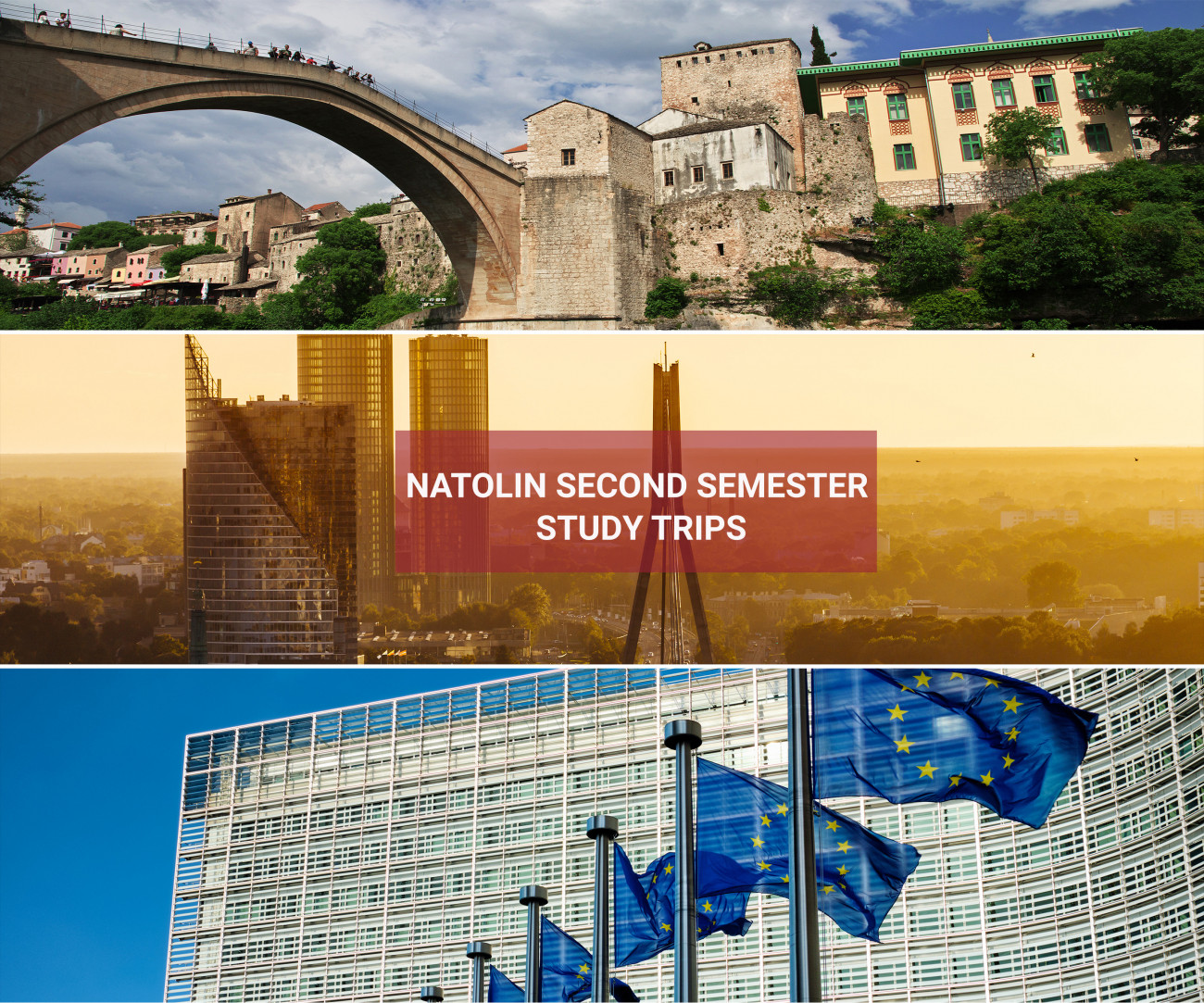 Natolin Second Semester Study Trips - a recap from our academic journey to Brussels, Luxembourg, the Western Balkans and the Wider Baltic

From 1 to 7 May 2022, the students of the College of Europe in Natolin embarked upon one of four tailor-made second semester study trips to different destinations within the European Union and its neighbouring countries.

The study trips are an integral part of the academic programme of the Master of Arts in European Interdisciplinary Studies. The second semester study trips offered students the opportunity to apply the knowledge gained in the first and second semesters and to carry out research for their Master's theses.

Watch the video teaser below to discover our Natolin students' impressions from the study trips to Brussels and Luxembourg; Montenegro, Bosnia and Herzegovina, Croatia and Serbia; as well as Finland, Estonia and Latvia!

The full video documenting our journey will follow shortly. We also invite you to watch 7 episodes of our students' vlogs from the trips which we will be publishing on our social media daily from 23 till 29 May 2022! 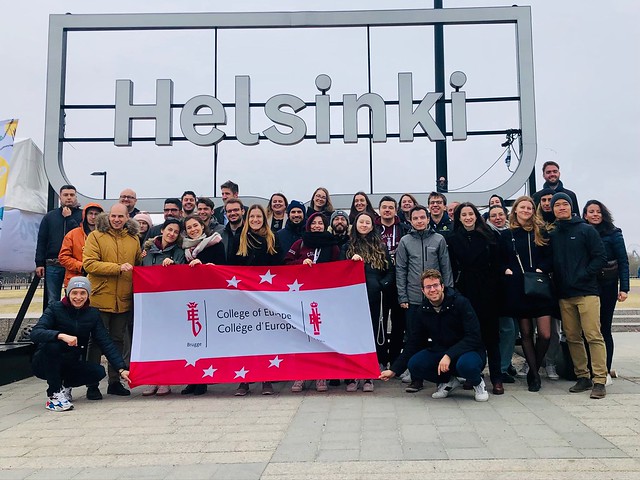 As during every study trip, we published regular updates on our Facebook, Instagram and Twitter pages. Look for #NatolinOnTour to learn more about our activities and read the reports on each study trip below to find out about the detailed programmes on-site.

During the study trip to Brussels and Luxembourg, the Natolin students from the Vogel‑Polsky Promotion explored the implications of and responses to the changing security landscape in Europe because of Russia’s war against Ukraine. The programme included meetings with representatives from the various EU institutions and NATO as well as think tanks, civil society, journalists and business.

A first central theme was defence cooperation in Europe and the revitalization of the transatlantic partnership. Therefore, our students met with officials at the European External Action Service to discuss EU foreign and security policy in the changing geopolitical context and with a view to Russia and the US. They also had the chance to discuss these current issues with two permanent representatives of EU member states. This was complemented by meetings organized with the German Marshall Fund of the United States and a visit to the news agency Euractiv where students discussed matters on EU defence from different perspectives.

During a visit to the NATO headquarters, students familiarized themselves with the various dimensions of the shifting security landscape, including collective defence, countering disinformation and implications for energy security. Energy security constituted another central topic of the study trip, which was discussed during several meetings, including at the European Commission, the think tank CEPS and at the representation of Naftogaz of Ukraine where students could get an outside-in perspective.

The third central theme of the visit was the EU’s Eastern neighbourhood and the prospects for a revitalized enlargement agenda. Students discussed these themes with members of the cabinet of the Commissioner for Neighbourhood and Enlargement and with the acting director general at DG NEAR. Discussions on the future of democracy in Europe at the European Parliament and the European asylum governance, especially following the displacement of people due to the war, complemented the programme. In this context, the group had a meeting with a representative from EPC and the chance to sit in a hearing at the CJEU in Luxembourg on the application of asylum rules in the EU.

The study trip to the Western Balkans was composed of two slightly different itineraries within the region. One group went to Croatia and the other to Serbia, while both were traveling to Montenegro and Bosnia and Herzegovina. The overarching theme for both was “Seeking a new momentum amid new security challenges.”

The study trip started in Podgorica, the capital of Montenegro. The group was hosted by the Embassy of Austria for a comprehensive series of meetings with Dr Oana Cristina POPA, Head of the EU Delegation to Montenegro and Mr Đorđe RADULOVIĆ, Former Minister of Foreign Affairs of Montenegro, as well as a panel discussion on the role of civil society in the integration process.

From Podgorica, students travelled to Mostar in Bosnia and Herzegovina for a guided tour reflecting on the ethnical and religious diversity of the region, and later to Sarajevo for a rich programme of meetings. In the Bosnian capital, our students had the chance to meet with Mr Johann SATTLER, Head of the EU Delegation in Bosnia and Herzegovina, as well as took part in a panel discussion on the religious diversity of the region and a fireside chat about freedom of speech and the struggle for influence in the media sphere. As part of the last session in Sarajevo, students visited the NATO military camp in Butmir and had an insightful talk with Dr Martin KHULL-KHOLWALD, special advisor to the COM EUFOR.

The last country students visited was Serbia with its capital Belgrade which allowed them to discover yet another version of the regional narrative. This sequence of the programme involved a guided tour in the city, as well as a lecture on Balkan identities and the legacy of wars, a round table on transitional justice, human rights and reconciliation in the Western Balkans, a discussion on non-Western actors in the Western Balkans, and a meeting with Mr Emanuele GIAUFRET, the Head of the EU Delegation to Serbia.

The study trip was an extraordinary chance for students to discover the region of the Western Balkans in a deep and comprehensive manner, to exchange with a diversity of speakers including diplomats, governmental officials, activists and representatives of the civil society which allowed our students to understand the different perceptions of social and ethnical groups.

The second group of students travelling to the Western Balkans began their journey in Croatia, member of the EU since 2013 and playing for this very reason a special role in this part of Europe. The trip started with a guided tour of Zagreb and a meeting on the painful remembrance of the Balkan Wars at the origin of many of today’s societal, ethnic, religious, and political problems.

The insights of Ms Vesna TERŠELIČ, Director of Documenta, an organisation whose main task is to deal with this difficult past, were invaluable. The panel discussion that followed provided students with essential knowledge on the Berlin process, the further integration of Western Balkan countries in the EU and the place that Croatia should occupy in the future regional initiatives. Each speaker, university professor, representative of the Croatian government, journalist or researcher brought a different perspective on issues that remain central for the European community’s future. These points of view were complemented later that day by H.E. Mr Vladimir DROBNJAK, Foreign Policy Advisor to the Prime Minister of the Republic of Croatia.

With security as one of the main themes of the trip’s academic programme in the Western Balkans, a meeting with a professor, former military officer, and representative of Croatia to NATO and the EU, Dr Robert BARIĆ, appeared particularly important. Thus, the discussion revolved around European and Balkan security as well as the role of NATO, the EU, and the US in this field.

The journey continued in Bosnia and Herzegovina, whose spectacular nature impressed the group while travelling to Sarajevo. The visit of the NATO military camp in Butmir and high-level meetings with H.E. Mr Gabor HORVATH, Political Advisor to the Commander of the EUFOR mission, and Mr Edin FORTO, Prime Minister of the canton of Sarajevo, gave the students a complete overview of Bosnia and Herzegovina’s current political and security situation.

The next days in Bosnia and Herzegovina’s federal capital city were rhythmed by talks, meetings and fire chats to discuss major questions like the role of external state actors in the region (with Professor Nedžma DŽANANOVIĆ MIRAŠČIJA), the role of the EU in supporting the young state’s efforts to join the community (with H.E. Mr Johann SATTLER), the central place of religion in the country’s history and current political and public spheres (with guests among which Mr Jakob FINCI, President of the Jewish Community of Bosnia and Herzegovina and actor of a famous case law) as well as the fight for freedom of speech, independent media and the struggle to face disruptions caused by disinformation (with engaged and independent journalists). Our students could not miss the city of Mostar. A presentation by Ms Monia MALEŠEVIĆ, from the city’s university, helped the group to understand the historical, religious and cultural complexity of Bosnia and Herzegovina. Additionally, the students explored the richness and diversity of this beautiful site during a tour led by a passionate guide.

Podgorica, the capital city of Montenegro, constituted the last stop of the group before flying back to Warsaw. That is where the study trip’s participants had a chance to meet other officials like ambassadors of the Republic of Poland and the Republic of Austria to the country, respectively, H.E. Mr Artur DMOCHOWSKI and H.E. Mr Karl Michael MUELLER and representatives of the EU Delegation. The high-level meeting with H.E. Milo ĐUKANOVIĆ, President of Montenegro, marked, at the same time, the last element of our academic programme on-site and probably one of the greatest highlights of this Western Balkans study trip.

Thanks to this study trip, the group acquired a deep understanding of the complex history of the Western Balkans. It discussed the main internal issues impacting the region's states, such as reforms, democratization, conflicts of memories, polarisation, and ethnic tensions. From now on, students would also be able to assess the place of external state and non-state actors in this part of Europe as well as the role of EU initiatives and policies in the Western Balkans. 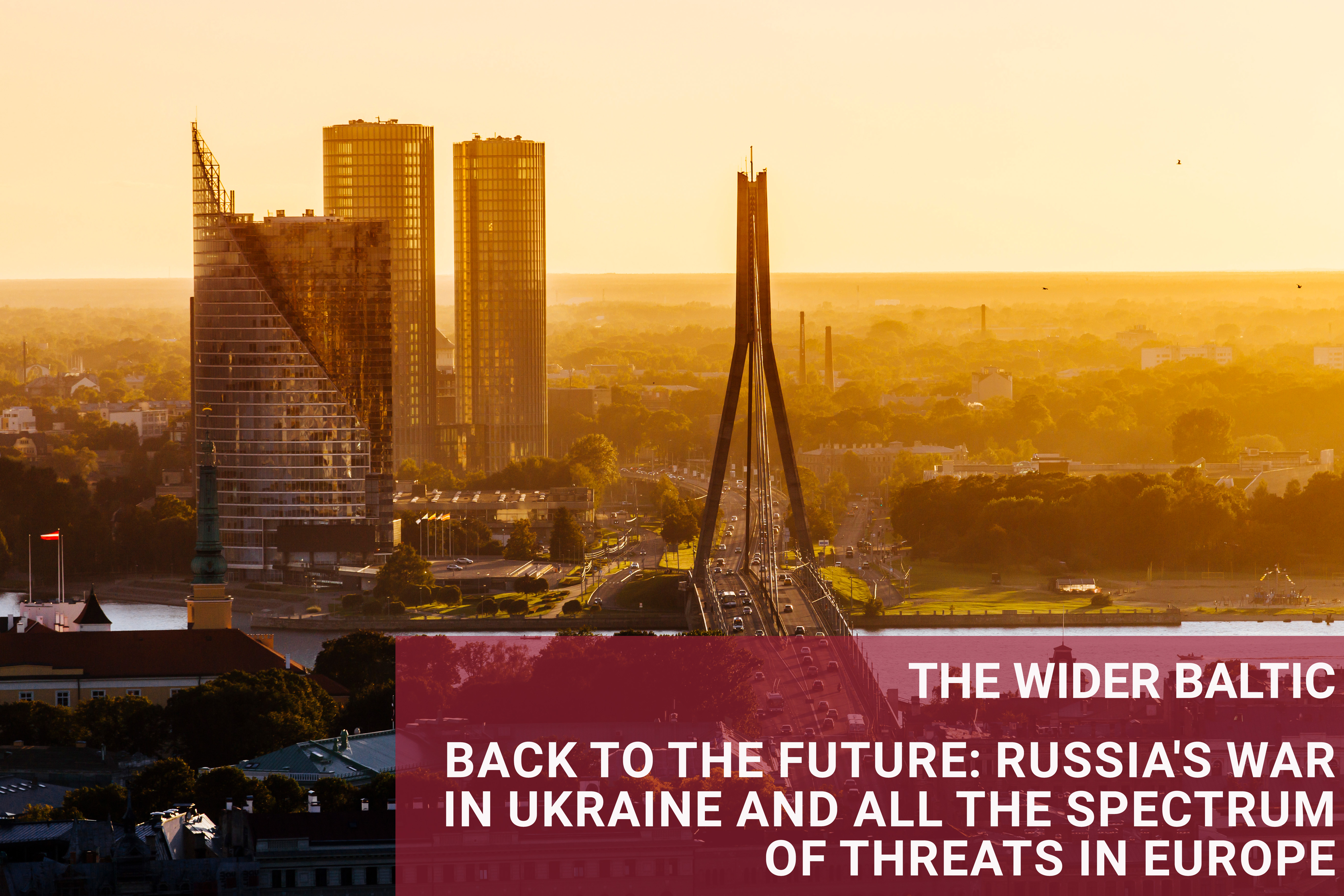 The 2022 Wider Baltic Study Trip addressed problems of regional and wider European security and defence within a geopolitical frame. During six days, the students travelled through Latvia, Estonia and Finland visiting academic and cultural institutions key for the opinion-shaping in the region.

This study trip allowed the students to explore and understand the multifaceted security challenges in the Baltic region, including the renewed salience of military force during visits to institutions such as Estonian Defence League, the European Centre of Excellence for Countering Hybrid Threats or discussions with high-level individuals including, among others Mr Janis KAZOCINS, National Security Adviser to the President of Latvia.

Beyond meetings with professionals, the students acquired a longer view of regional geopolitics through understanding the historical struggles between empires and republics for these lands, coasts, and seas over several centuries as well as the way in which these clashes represented and memorialized in the cultures of the region have contributed to the ongoing evolution of local, national, regional, and imperial identities. The participants visited, among others, the Estonian National Museum and the Museum of Occupations, and participated in guided historical tours of the cities of Riga, Tallinn, and Helsinki. The students were also introduced to the broader historical perspective on the region by Professor Andres KASEKAMP.

To learn more about the different destinations and topics of the previous study trips organized for Natolin students, click here.