Natolin’s genius loci has always been expressed through international exchange of thoughts, experiences and ideas, but also through friendships that, once made, last forever. The Veni, Vidi, Amici project was created here in Natolin to provide a novel platform for such exchange.

When we think of Natolin, we invoke Natalia Sanguszko née Potocka. The silhouette of Natalia’s sarcophagus – one of the most characteristic monuments of the campus – sculpted by Ludwig Kaufmann and designed by the Italian architect Enrico Marconi in the 19th century appears on the Veni, Vidi, Amici logo. Natalia herself fell in love with Italy during her trip to the Apennine Peninsula, described by her mother, Anna Potocka, in the book Un voyage d’Italie.

Veni, Vidi, Amici is a project inspired by the esprit de Natolin. It combines education, culture, and dialogue – values that have always been at Natolin’s core. Over time, the place that nowadays is our campus, has been a place that attracted those ideas which made the world a better and a more beautiful place and which gathered people trying to put them into life. This is how Natolin has made a lot of Amici. Year on year, with every promotion, the circle of amici continues to grow. The Veni Vidi Amici project’s framework allows for multi-format meetings and publications as part of this undertaking.

To celebrate the project’s first edition, the College of Europe in Natolin plans a publication in 2022 which will offer a broad and a long view of the historical ties between Warsaw and Italy. The publication will take you for a walk starting from Natolin and ending at the Schlenker Family Palace (Polish: Pałac Szlenkierów) which is now the seat of the Embassy of the Republic of Italy in Poland. The Italian Embassy in Warsaw is a strategic partner of the Veni Vidi Amici project’s inaugural leg. 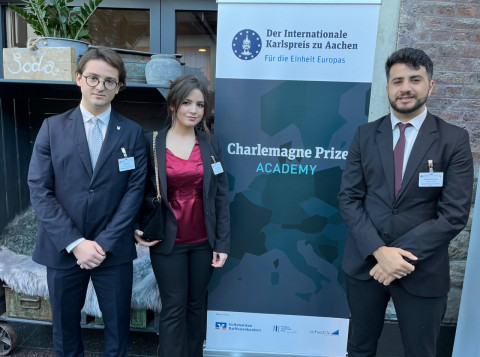 Natolin students at the Karlspreis Europa Summit in Aachen

The Karlspreis Europa Summit brings together around 150 decision-makers from the realms of politics, science, business, media and society. This year, the summit emphasized the involvement of young...
Read more
END_OF_DOCUMENT_TOKEN_TO_BE_REPLACED