On Thursday, 28 April 2022, the Georgian National Day was held at the College of Europe in Natolin. Originally planned to take place on 25 February, the event was postponed in solidarity with fellow Ukrainian students at Natolin in the wake of Russia's attack on their country.

The event under the motto “BE OUR GUEST!” was opened by a presentation by the Georgian students in Natolin on the Georgian culture, with particular reference to the original alphabet, polyphonic singing, ancient wine-making tradition, and custom of hospitality. It also included a virtual journey through the historical strive towards freedom (symbolized by an image of St. George fighting an evil dragon) and the pro-European aspirations of the Georgian people.

Afterward, a duo of invited Georgian dancers took the stage parallel with the Natolin Choir, performing “Suliko” and “Chrelo Pepela”. The audience also enjoyed another song by Georgian students Maka Jashi and Giorgi Ukhurgunashvili. Finally, the guests moved to the lobby to savour a selection of Georgian wine and Chacha (grape brandy). Simultaneously, everyone interested in the Georgian alphabet was offered a calligraphy session. 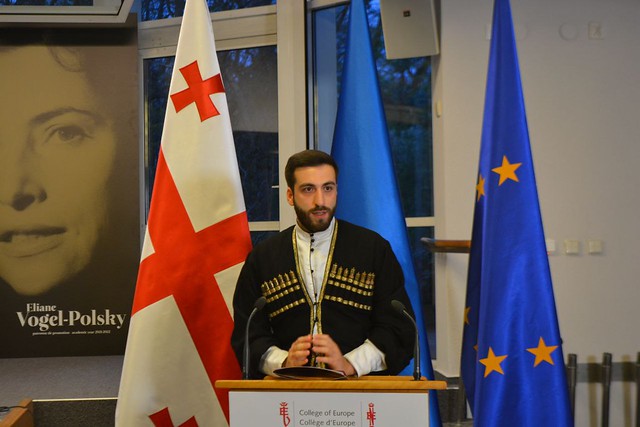