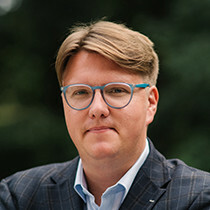 From 2008 to 2011 he worked as a Polish language teacher at the Faculty of the Translation of the University of Granada (Spain). In 2010 he completed postgraduate studies in Spanish (Estudios Superiores de Lengua Española) at the University of Granada. Between 2011 and 2016 he served as the Secretary of the District Committee of the Spanish Language Competition held every year in Poland. He has been teaching Spanish at the Natolin Campus of the College of Europe since 2012.

Maciej Jaskot has authored more than 20 scientific articles published in Spanish, English, Polish and Russian about cultural linguistics, phraseology and foreign language teaching and several books (including a Spanish Orthography and the Dictionary of Active Polish and Ukrainian Phraseology, co-authored with Dr Wojciech Sosnowski).

He is interested in Romance and Eastern Slavic languages, the linguistic reality of the former Soviet Union countries and in planned languages, especially Esperanto.