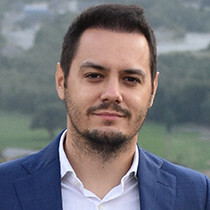 Mattia FILIPPIN studied Italian, European, American and Comparative Law at the University of Trento in Italy. In 2010, he participated in an exchange programme with Vermont Law School in the United States. He graduated in 2011 with a Master's thesis in American law and jurisprudence on "The American Supreme Court between Law and Politics".

In 2012, he graduated from the College of Europe in Natolin with an advanced Master of Arts in European Interdisciplinary Studies. He specialized in the "EU as a Regional Actor" and wrote a Master's thesis on "The Kaliningrad Oblast: Regional Identity, Economic Development and External Dimension of Russia’s westernmost territory".

Since August 2021, Mattia holds the position of Senior Strategic Advisor at the College of Europe in Natolin.