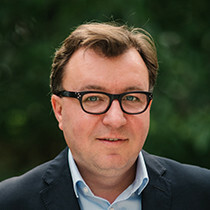 Dr Wojciech SOSNOWSKI graduated from Lomonosov Moscow State University (2000) with a Master of Arts in Philology, specialism: Russian as a Foreign Language. He has obtained a Ph.D. at the Institute of Slavic Studies (Polish Academy of Sciences).  Since 2012 he has been Assistant Professor at the Institute of Slavic Studies at the Polish Academy of Sciences.

He has published more than 30 academic articles published in English, Russian, Polish, Ukrainian and Bulgarian on linguistics and methodology of teaching Russian as a foreign language. He is the author of several books: Study with us (3 volumes) (Russian tests for levels B1, B2, C1), “С Россией на «ты»”, ”Polskie czytanki” (2 volumes), co-authored with Wioletta Gurdak, The Dictionary of Semantic Equivalents in Polish, Bulgarian and Russian and The Dictionary of Active Polish and Ukrainian Phraseology, co-authored with Dr Maciej Jaskot.

He has been teaching Russian at the University of Warsaw (Centre for Foreign Language Teaching) and has amassed considerable experience in teaching all levels of Russian to international students as well as in teacher training. He is involved with the Russian Language Testing Center for Foreigners of the St. Petersburg State University (Certified Examiner for the Official Russian Language Test TORFL, Test of Russian as a Foreign Language).